Dr Sigrun Lange, Senior Lecturer in Molecular Pathology, led a new study that investigates biomarkers as an indicator of health in whales. 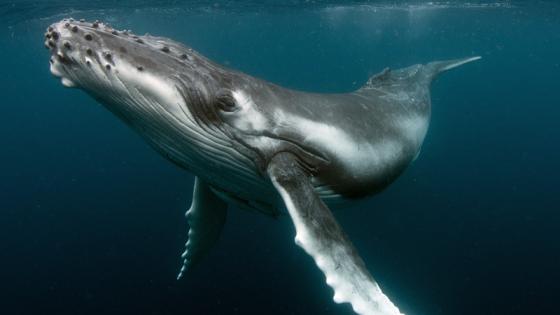 Dr Sigrun Lange has led a new study focused on developing a new type of biomarker in whales, by comparing specific components in blood samples of several different whale species. The focus was on extracellular vesicles, which are membrane vesicles released from cells and can be isolated from many body fluids. These vesicles carry a lot of genetic and protein information which can be analysed to assess disease and health markers.

Whales are long-lived sea mammals and are exposed to ongoing changes in sea temperatures due to climate change, environmental contaminants and pollution. Such changes can result in increased exposure of whales to pathogens, including bacteria, viruses and parasites, many of which are adapted to certain temperatures.

Therefore, a shift in ocean temperatures can result in life threatening opportunistic infections in whales, and climate changes also lead to shift in their habitat, which can change their exposure to different pathogens. Other environmental factors, such as xenobiotic pollution also affects a range of marine mammals globally.

Such increased disease susceptibility due to environmental factors, alongside effects of chronic diseases and starvation, has received considerable attention in the wild life and conservation research field, but still many questions remain unanswered and there is a great knowledge gap in fully understanding how sea mammals combat such immunological challenges. As accumulative effects of pollution may particularly impact long-living sea mammals such as whales, it is of great importance to identify reliable biomarkers which could be used for assessment of whales’ health status.

Talking about her research, Dr Lange said: “Extracellular vesicles are being developed and used as tools to understand many human diseases but there is very little research on how to use these vesicles to assess health status of wild animals.

“We isolated these vesicles for the first time in whales and identified specific changes in proteins and genetic components in the vesicles of several whale species. This has given us a range of information about their health and metabolic function. We are now working at refining these markers to develop a novel biomarker panel.

“Another interesting aspect of studying these long-lived sea mammals is that they can give us unique insights into cancer-resistance, control of mechanisms involved in oxygen starvation and ageing, as whales belong to long-lived mammals that display such unusual characteristics. Therefore our studies may also be of considerable translational value to further current understanding of new pathways in human longevity and cancer research.”

Read the full study in the Science Direct journal.