BBC Radio 4 journalist Jon Manel visited the site of the reviving Regent Street Cinema to make a programme for World at One, broadcast on 4 December, taking the radio audience on an insightful journey through the history of the Cinema from the past to the future. 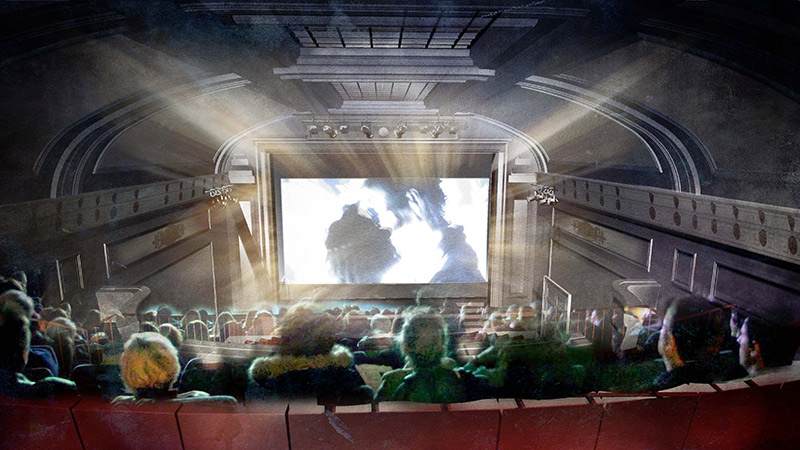 The five-minute section on the Regent Street Cinema included a number of treasures from the cinema’s rich heritage that Manel experienced while visiting the site. One of those was a real-life Cinematographe that David Cleveland, cinematographer, film archivist and expert, brought from his own private collection of historical equipment to the Cinema stage, and screened the same Lumière films that were shown on 21 February 1896 when it all began.

Anna McNally of University of Westminster Archive discussed the Cinema’s history as ‘the birthplace of British cinema’, showing off her expertise on the history and heritage of this important venue. Anna is a member of the Archives team that co-ordinates the production of an upcoming publication about the Cinema’s history which will be the fourth in a series about the University’s history. The publication will coincide with the opening of the restored Cinema and will be richly illustrated with images from the University’s archive.

Finally Simon Boyd read the full eyewitness account written by his grandmother, Lady Sybil Grey, in a letter to her father. In it she describes a visit she made in 1896, aged 14, to the Polytechnic Institute to see the Lumière Brothers’ films and describes them as "the photographs that move you know like real life, it was delightful." She remained very interested in cinema all her life and took classes in amateur film from 1927 onwards.

You can listen to the show on BBC iPlayer.