Dr Itay Lotem, a Postdoctoral Fellow in Modern Languages and Cultures at the University of Westminster, offered his academic expertise to several media outlets, commenting on the French elections. 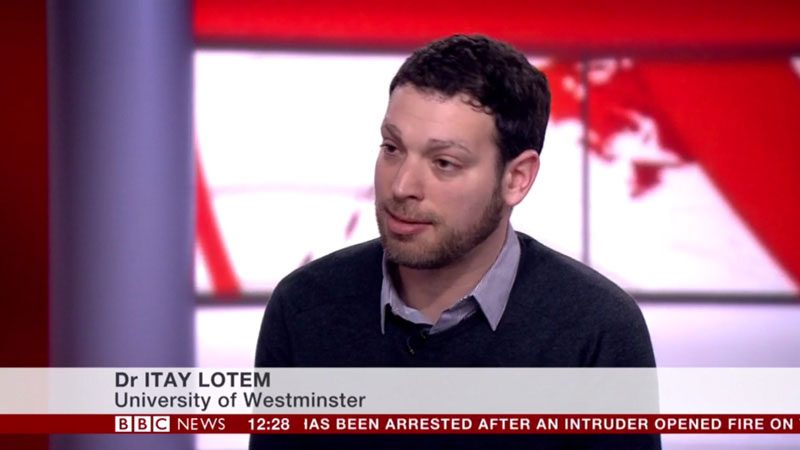 Dr Itay Lotem was invited to provide commentary on the French elections, the results of which was revealed on 7 May, for several outlets such as BBC Business Live, The Huffington Post and BBC News.

Dr Lotem was first invited on 5 May for a live interview by BBC Business Live to discuss about the potential elections results’ consequences on the French economy. He commented: “One of the biggest problems in France in how to actually make the economy work, how to resuscitate the economic model while maintaining some king of welfare level comfort. […] The biggest issue is unemployment and it has remained stubbornly high, around the ten per cent, for the last thirty years which is the big building block for both Le Pen and Macron, so whatever they say, the big problem is how to get unemployment out.”

Dr Lotem also published a blog on the Huffington Post, featured on the online newspaper’s front page on 5 May, about Le Pen’s success in “normalising the Far-right” in her campaign. He stressed in his article that even though Macron was predicted as the favoured Presidential candidate, the far-right party seemed to have been perceived, for the first time, as a real threat in the second round Presidential elections.

Back in 2002, father of Marine Le Pen and founder of the National Front, Jean Marie Le Pen also managed to lead his party into the second round of the Presidential elections facing the republican President Jacques Chirac. Following these results, a huge mobilisation from other parties united to fight against the National Front. Dr Lotem explained that unlike the 2002 scenario, the different parties, facing National Front in the Presidential elections, did not seem to be as united against the Far-right.

Finally, Dr Lotem was also invited to offer his academic expertise for a live interview on BBC News on 8 May about the French electoral and political systems and the upcoming challenges President Macron will have to face. He commented: “First of all, there are 577 constituencies so we are talking about quite a few constituencies for a very new party without any support just yet.”

He added: “One of the very much expected things is host of socialists’ members of Parliament losing their seats anyhow, especially if we look at the last elections results. […] In order to look at how this might transpire into a number of seats, the best way is to look at the first round of the presidential elections and to see who got the majority and where. This gets us to about 240 seats for Macron, on top of 214 seat for Le Pen, 70 seats for Melenchon and 57 seats for Fillon. On the other hand, this does not necessarily mean that it is going to be the same way in June.”