Architecture students go on field "trip of a lifetime" in India

A large group of postgraduate architecture students travelled to India together with their tutors to learn about Indian urbanism and architecture. 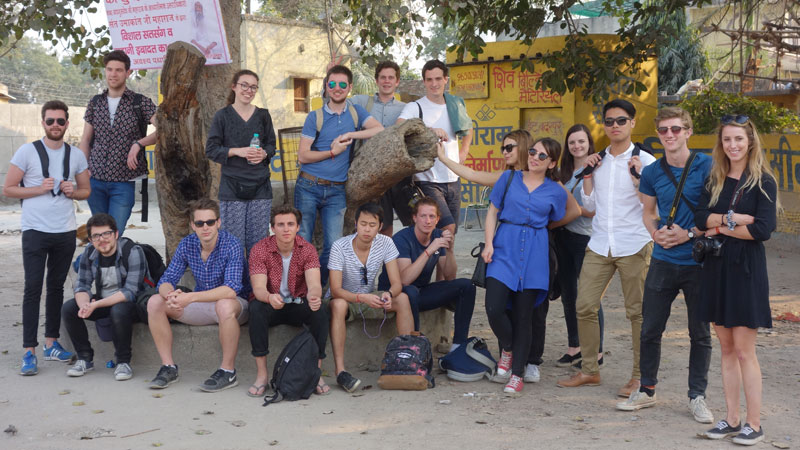 They also met students in two major Indian schools of architecture: The Centre for Environmental Planning and Technology University (CEPT) in Ahmedabad and the School of Planning and Architecture (SPA) in Delhi.

The delegation also visited Bundi, Jaipur, Chandigarh and Varanasi during the trip, which, according to student Duana Darmina, was "a trip of a lifetime."

The Westminster delegation belongs to DS12, which is one of the 10 postgraduate design studios in Westminster’s Master of Architecture (MArch) (RIBA pt II) programme. This year the studio has been imagining new urban settlements on the 12km square site occupied by Heathrow Airport to the West of London, which could provide housing for up to 500,000 people. Many of the Londoners living in the region are of Indian descent, therefore the trip helped students to learn about contemporary west London roots. It also provided an opportunity to witness the diversity of Indian cities.

According to student Nicolas Roccia, "Our trip to India has really helped me to think about the possibilities of high density but low rise housing as a viable solution for London's housing crisis. I am inspired to try to recreate some of the intensity of Indian streets and the role of the public realm within a city fabric."

In Delhi, DS12 were welcomed by SPA’s Head of Housing and Future Cities Coordinator Professor PSN Rao who introduced them to staff and students working on housing and urban design schemes in and around Delhi. They learnt about SPA’s work in the village of Jaunti , which has been adopted by Udit Raj MP who explained the kinds of problems the people of Jaunti are facing.

SPA and the University of Westminster are partners within the Latitudes network, a global educational network encouraging students to design for climate change.

In Ahmedabad, Westminster students were welcomed by Professor Mary Jane Rooney, Head of CEPT’s International Outreach Mission. They learnt about Ahmedabad’s bid for world heritage status for its old walled city. Part of this educational experience included staying in the walled city in restored 17th-century havelis, which have been turned into guest houses.

Westminster tutor Ben Stringer said: “Not only does Ahmedabad have an exceptionally rich architectural heritage, but it is experiencing a lot of important developments now and so it is a fascinating time to be there to get a glimpse of some of the very complex and contested social and political issues that city planners, developers and architects have to contend with.”