Richard Morrison, final year student on the Master of Architecture (March RIBA Pt II) programme, has been announced to be the winner of the second prize in the Drawing of the Year 2017 competition by Aarhus School of Architecture. 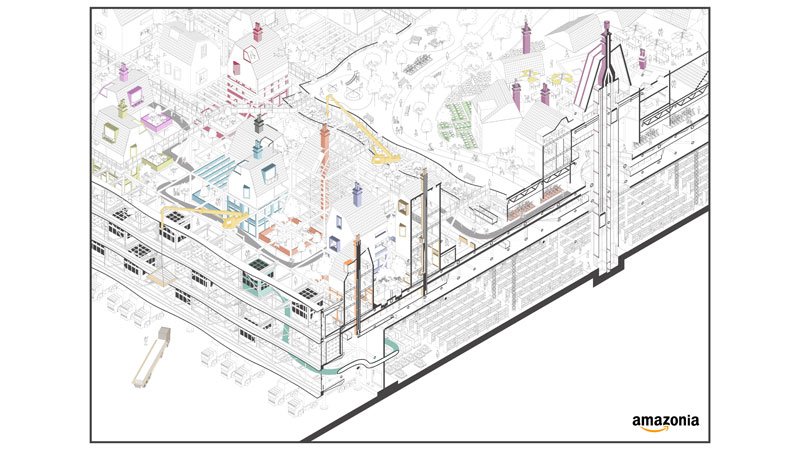 By submitting their digital drawings for the competition, 234 architecture students answered the question ‘What is Everyday Utopia?’, and Richard Morrison’s axonometric drawing Amazonia, which shows how our world is organised for shopping and distribution, was awarded the second prize worth €2000.

Commenting on Richard Morrison’s entry, the jury of the competition said: “The concept is overpowering, putting forward a precise idea and question. It is simultaneously political, architectural, detailed and explained. It is polemical. Our reliance on Amazon is already a reality, and the drawing of an everyday utopia becomes an extension of a future life we somehow already live.”

Richard said: "I think the award is a great opportunity for architecture students to be recognised for the work they put into their studies, and the range of different styles exhibited from all of the entries was really impressive.”

Richard had created the image as part of his studies on the Master of Architecture (MArch)(RIBA Pt II) programme, where he is part of Design Studio 21 since the beginning of the course and his tutors are Clare Carter, Gill Lambert and Nick Wood.

Speaking about the idea of the awarded drawing, Richard said: “The studio's area of interest last year was Doncaster. My idea came to me when I discovered that a huge new Amazon distribution centre was being proposed near a small town on the periphery of Doncaster. A future where Amazon wanted their employees to live as close to the warehouse as possible seemed plausible.”

He noted: “My tutors were key to the drawing being completed. By not prescribing a drawing style, they give their students a huge amount of creative freedom, which I think is important in architecture school.”

The proposal of the Amazonia project was to create a new community for the warehouse workers above the distribution centre. In the drawing, an inhabited truss spans over the warehouse roof physically separate from the existing warehouse but arranged in response to the activities below.

The proposed housing responds to life in the warehouse below where life is arranged on a strict grid, and movement is confined by narrow alleyways and 90 degree turns. Whilst the grid is still present in the truss, its rules
are played with and are sometimes broken to create more varied and interesting spaces. In the warehouse there is no privacy. Performance and location are monitored by machines while talking to colleagues is forbidden. The proposal responds to this by creating a range of public and private spaces designed to foster the communal spirit which has been lost.

Clare Carter, Senior Lecturer in Architecture and one of Richard’s tutors on the programme, said: “Congratulations to Richard on winning second prize in the Aarhus drawing competition. His complex and detailed cut away axonometric drawing was made as part of his design thesis, "Amazonia", in DS 21 last year. It is communicating an ambitious proposal for injecting humanity into the "Amazon” business model. Richard sets out to achieve this by designing socially inspired, playful housing forming a Utopian community.”

Learn more about studying on the Master of Architecture (MArch)(RIBA Pt II) programme.