Architect and Westminster alumnus Tim Francis has launched his own design practice, starting with a project to turn a 15 sq metre stone outhouse into a liveable home for his family of five. 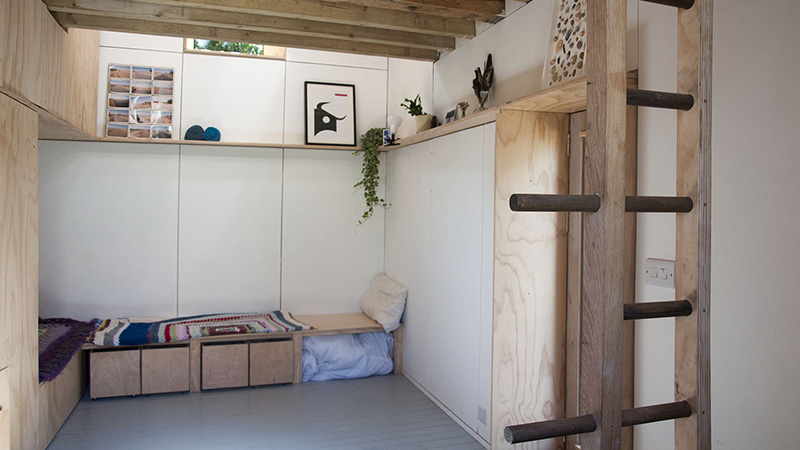 After a summer spent in a campervan, and before the arrival of their third child, Tim Francis and his family decided to downsize, moving from a spacious flat in London to the Fruit Store, a single room outhouse not much bigger than a garage.

The Fruit Store is a 15 sq metre stone building which had previously been used to store apples and had no electricity or running water. Over the past 12 months Tim has turned the building into a cosy family home.

The walls have been insulated, and skylights, flooring, electricity and water installed. Tim came up with the unique design to fit as much as possible into the limited space. The kitchen consists of a plug-in electric hob unit, a camping fridge and a sink, the kitchen table folds out of the wall and packing crates serve as chairs. The children have use of a mezzanine space, which doubles as a playroom and bedroom, and for Laura and Tim, benches double as beds.

Before downsizing, the couple lived in north London with a lot of space and different rooms in their flat, but with no outdoor space. Their mobile home summer holiday made them rethink their lifestyle and how they could live with, and on, less. With a smaller home, fewer possessions and fewer bills, there are fewer financial pressures.

Tim committed himself to self-employment, setting up his own architectural practice whose first project was converting the Fruit Store. Their new lifestyle in their tiny house allows them to spend more time together as a family and more time outdoors.

Commenting in The Guardian Tim says: “I asked James [Tim’s son} what he thought about us living here the other day, and he said: ‘I like it. We’re like a herd,’ which I thought was a nice way of looking at it. As an architect you tend to work on the assumption that a family house is X number of bedrooms, arranged in this particular way to a particular set of measurements, but those are quite sloppy assumptions about what a home is or should be. Trying out living on this scale allows us to test what we really need to live.”

You can see more images of The Fruit Store on The Rural Workshop.