Ben Jennings, who graduated from the Illustration BA Honours course (now Illustration and Visual Communication BA Honours) in 2012, was awarded the Political Cartoon of the Year for a second time, after winning the prestigious prize for the first time while he was still a student. 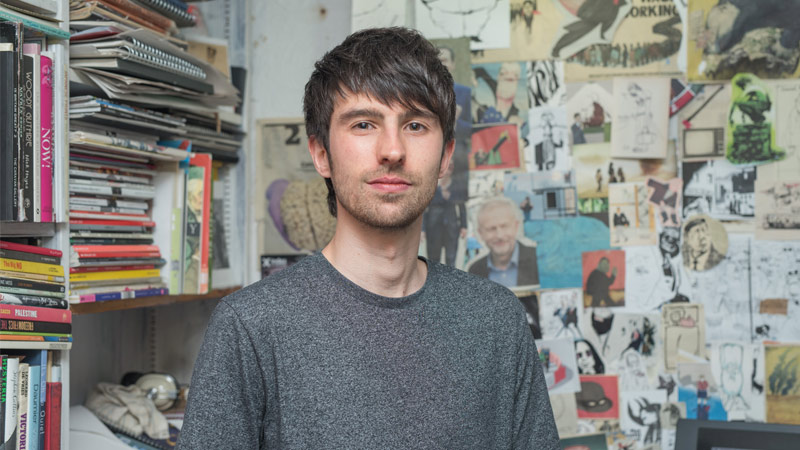 The Political Cartoon of the Year Awards celebrate the most prominent cartoonists from UK’s national newspaper and this years’ winners were announced during a special ceremony where George Osborne, Editor of the Evening Standard and Former Chancellor, was a guest of honour.

This year’s winning cartoon by Ben Jennings, titled 'The White (Supremacist) House', was described by website TotalPolitics as an alteration of the White House, which incorporates a Ku Klux Klan hood. Click here to look at the winning drawing.

It was the Gaddafi Treasure Map cartoon – a map of a country that was descending into violent chaos, complete with treasure chests, oil fields, Nato planes and a grim ‘X marks the shot’, all overlaid across the contours and features of Gaddafi’s face, that won Ben the prestigious award back in 2011, having been nominated among leading figures such as Martin Rowson and Steve Bell.

Ben said he realised he wants to be a cartoonist at the age of 15 and started out by selling caricatures to students and teachers at school. Having been introduced to satirical cartooning and the work of Gerald Scarfe and Ralph Steadman in school later, Ben’s decision was reaffirmed and he had to choose his further academic path.

Speaking about his choice of university, Ben Jennings said: “I liked the tutors on the course – some of them were people I’d heard of and liked their work. When you are a student and looking at people who do what you want to do for a living, you hold them in such high regard, so that was partially the reason for choosing Westminster.”

Throughout his studies, Ben was keeping a blog with examples of his illustrations, which eventually led him to work for The Guardian through cartoonist Martin Rowson who received the blog and was looking for a cover at that time.

Five years after his final year at the University, alongside his weekly appearances in the i newspaper and in the Financial Times supplement, Ben continues to do a regular illustration for The Guardian once a fortnight. GQ Magazine, New Statesman, the Observer magazine, Prospect magazine, the Radio Times and Newsweek (Japan) are just some of the publications that Ben has drawn for, while organisations including Amnesty International, the Index on Censorship and the Professional Footballers Association have all commissioned his work.

In October this year, Ben was also awarded the Cartoon Art Trust Award in the caricature category with judges describing him as “a master of political caricature” and commending his drawings for their “superb likeness” and “ability to transform his targets”.

Learn more about studying on the Illustration and Visual Communication BA Honours course.

Visit Ben Jenning’s website to see more of his award-winning work as a cartoonist.