Architecture alumna Maria Vergopoulou’s design was among the top three winners for the Dezeen X MINI Living Future Urban Home competition which called on Dezeen readers to design a home for 100 years in the future. 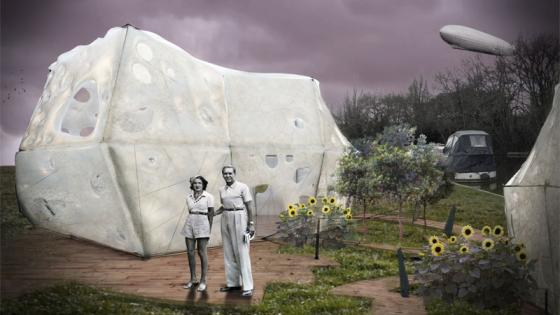 The contest asked readers to consider the challenges that cities will face over the next century and to propose innovative solutions for urban homes to overcome these challenges. The competition also asked participants to submit designs responding to the MINI Living maxim, ‘big life, small footprint’ by making the most of available space in cities.

Through her design, she imagined a future where modern building materials would become incredibly scarce. She suggested that this could lead to a new DIY movement, where people would grow vegetables to produce bioplastic, which they would use to build their own cocoon-like homes.

Talking about her winning project, Maria said: “This design was the outcome of rigorous physical and computational experimentation, focused on the combination of bioplastic with various weaving patterns. The ambition was to create a resistant and environmental friendly building method, available for everyone to reproduce. The project was focused on the process of making, creating a manual for the construction of a prototype house in a future community of scarcity.

“Designers have a responsibility. We must explore materiality and technology in response to the environmental issues of our age.”
The Dezeen x MINI Living Future Urban Home Competition received over 400 entries from 56 different countries around the world. Fifteen concepts from nine different countries were initially shortlisted in December 2018, from which the jury selected the top three.

The contest is part of Dezeen X MINI Living initiative, an ongoing collaboration between Dezeen and MINI Living exploring solutions for a brighter urban future.

Find out more about the Master of Architecture (MArch) (RIBA Pt II) course offered at the University of Westminster.