Activists and academics debate democracy and dissent in China and India

Booker Prize winner and renowned activist Arundhati Roy joined a gathering of leading activists and academics at the University of Westminster last week to debate the role of democracy and dissent in China and India. 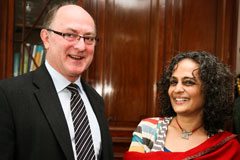 The University’s Fyvie Hall provided the venue for distinguished writers, filmmakers, poets, bloggers and intellectuals to come together and discuss a range of issues such as inclusionary/exclusionary nationalisms and coercive/co-optive statehood in the two countries, with a particular focus on Tibet and Kashmir.

Ms Roy, author of The God of Small Things, was invited to deliver the C R Parekh Lecture where she examined the meaning of dissent and democracy within the context of one of the world’s largest countries, India. As well as being an award-winning writer, she has been described as India’s ‘harshest critic and its most fearless activist’, and received the Sydney Peace Prize for her advocacy of non-violence.

Wang Lixiong, a leading intellectual and writer and recipient of the Light of Truth Award from the Dalai Lama, delivered a second key note speech examining the implications of democracy and dissent in China.

Discussions also centred on the significance of the protests in Tibet and Kashmir and to what extent they reveal peoples’ aspirations, as well as the myths associated with nationalism and statehood in India and China.

The event was organised by Dr Dibyesh Anand, a Reader and Associate Professor in International Relations at the University of Westminster. Dr Anand said: “Kashmir and Tibet are places with people who live in a system they may not necessarily identify with, people whose life and livelihood is extraordinarily precarious… many of whom have been forcibly displaced or involuntarily exiled.

“Yet for an international audience, these places are seen as largely intractable problems.”

Other speakers attending the conference included Dechen Pemba, a UK-based Tibetan activist; Jianglin Li, author of 1959 Lhasa! How did the Dalai Lama Escape?, Mirza Waheed who works for the BBC Urdu Service; Nitasha Kaul, a scholar and writer; and Sanjay Kak, a documentary maker.

The conference was sponsored by the Nirman Foundation, and the Department of Politics and International Relations’ Centre for the Study of Democracy and Security and IR Programme at the University of Westminster.