11 June: An encounter with Agnes Heller 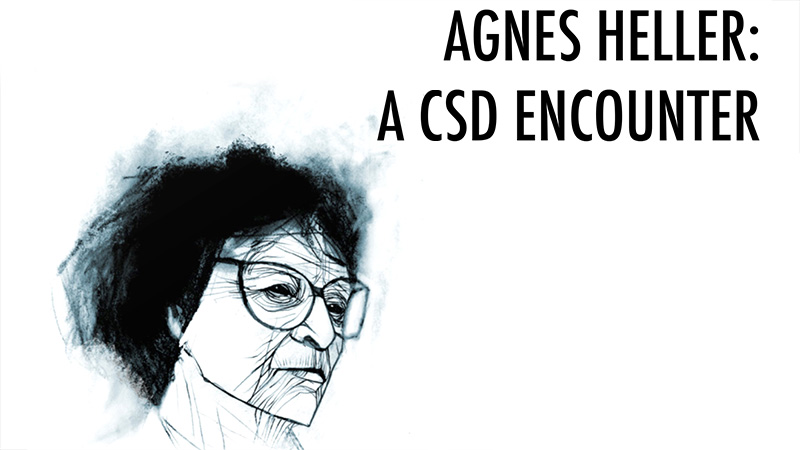 The event is open to students and the public. It is free, but you must register in advance.

Public lecture by Agnes Heller, chaired by Chantal Mouffe: "What went wrong with the religion of Reason?"

Agnes Heller is one of the leading thinkers to come out of the tradition of critical theory. Her broad intellectual range and publications includes ethics, philosophical anthropology, political philosophy and a theory of modernity and its culture. Hungarian by birth, she was one of the best-known dissident Marxists in central Europe in the 1960s and 1970s. Since her forced immigration she has held visiting lectureships all over the world and has been the Hannah Arendt Professor of Philosophy at the New School in New York for the last 20 years.

The annual CSD Encounter at the University of Westminster brings together scholars and members of the public to examine in detail the work of a leading contemporary thinker, in his or her presence. The one-day CSD Encounter includes workshops (by invitation only), followed by an evening public lecture. Previous guest scholars at CSD have included Charles Taylor, Stuart Hall, Julia Kristeva, Bruno Latour, Quentin Skinner, Richard Rorty, Michael Walzer, Judith Butler, Mary Douglas, Francis Fukuyama, Pierre Rosanvallon, and Adam Watson.

About the Centre for the Study of Democracy

The Centre for the Study of Democracy undertakes research and teaching in democratic theory and practice.

Established in 1989, and the only centre of its kind in the United Kingdom, CSD has an international reputation for excellence in political and democratic theory, institutional analysis, international politics and democracy and Islam. Chantal Mouffe, John Keane and Bhikhu Parekh have been leading contributors, and staff, students and partner organisations are currently engaged in a range of research projects.

The Centre holds seminars, workshops and conferences, collaborates with other institutions in the organisation of international events, publishes the CSD Bulletin and hosts the annual CSD Encounter. Recent collaborations have included a series of events on The Future of Europe (together with Birkbeck College, School of Law) and a workshop on A Multipolar World Order (together with Open University and Newcastle University). The Centre is also a founding member of the Space of Democracy/Democracy of Space Network.

CSD’s agenda is developed through a vital research culture and engagement with both academics and practitioners. CSD has established a range of collaborations with scholars and universities around the world.

CSD recognises that responding to the challenges that face democracy requires engagement beyond the academy and actively welcomes dialogue and collaboration with democratic practitioners and activists around the world.

By bringing theory, practice and people together, CSD seeks a dynamic and collaborative research culture, a student experience of engagement and a deeper democracy.

Current research continues the tradition of critical engagement with the principles and justification of liberal democracy. CSD is recognised as a leading voice in the development of agonistic democratic theory and continues to contribute to contemporary debates on deliberative, participatory and representative forms of democracy.