Date 10 October 2019
Time 5:30 - 7pm
Location Regent Street
Cost Free
Click icon to Share
Register for this event
The event is free and open to all, but booking is necessary.

The Centre for the Study of Democracy and the Institute for Modern and Contemporary Culture invites Sophie Wahnich (CNRS/TRAM) for the first cycle of the seminar series “French Politics: A Neighbour’s ‘History of the Present’”, entitled “An Authoritarian Spiral in France?” 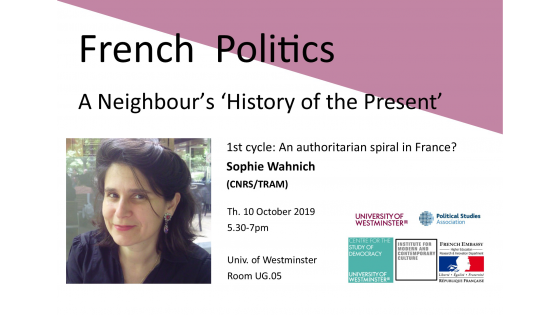 "The yellow vests did not appear out of nowhere in November 2018, but out of the latest betrayal of popular classes. It was not so much because of President Macron, who takes money from the poor and gives it to the rich in a very European logic.

No, the betrayal is that of the social democracy which occurred between 2012 and 2017, and which finds its roots even earlier. The previous president, François Hollande, a socialist candidate, was elected using words like “popular”, slogans like “change is for now”, and asserting that the real adversary was finance and that “it had neither a face nor a party”.

The French social democrats understood what had to be said to win, but they maintained the values of economic liberalism and believed in austerity. They ruled knowing that the measures promised against the speculative banking system and the notorious finance could only be fainthearted. They have destroyed the protective right to work and civil liberties in a context in which “terrorism” has justified a continuous state of emergency in order to repress activists, those who are worried about the planet, those who struggle not to end up into a wage slavery that does not say its name, those who invent a new art of gathering to talk at night. The last attempt to re-engage in the electoral discourse has widened the gap between the rulers and the ruled ones. The yellow vests tell us that they now link injustices and flawed political representation."