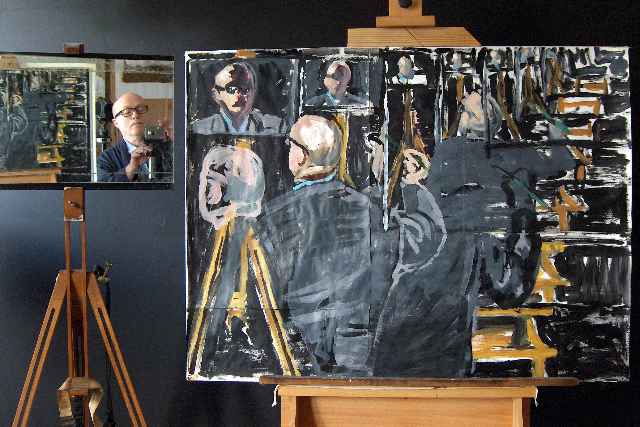 London Gallery West is delighted to present a retrospective of works by Ian Bourn from the last six years, featuring installation and assemblages combining painting, video and performance.

A pioneer of British video art, Bourn is best known for his self-performed video diary pieces with their fictional, tragi-comic characterisations drawn from real encounters, and for the collaborative site-specific performance events he co-instigated as part of the HOUSEWATCH group (1985-1997). Since 2010 Bourn’s work has expanded in new directions, incorporating painting and graphic elements and utilising interval-record video to develop the idea of pictorial composition as a time-based narrative.

Following cuts to public sector arts funding, the artist began a reassessment of his working practice. “My reduced circumstances forced me quite literally to go back to the drawing board and start painting; something I hadn’t done since college” explains Bourn. Making imagery, at first derived from the dilapidated interior surfaces of Bourn’s home, and later from his self-image reflected in mirrors, was to provide the source material for a series of installations described by the artist as “exercises in topographical and physiognomic conjecture, and meditations on the creative process”.

Initial compositions were based on a rough section of plasterwork near the skirting board of the kitchen wall, from which the artist extrapolated the image of a rocky coastline. This invented scene formed the basis for several landscapes, each visualised differently in terms of geological features, time of day and meteorological conditions. “As the coastal scene ‘revealed itself’ differently each time I painted it, I became interested in the nature of visual invention”, says Bourn. “I proceeded to make video recordings documenting the progress of each picture and my role in its construction.”

In 2014 Bourn initiated his Self-Reflective project, a set of mixed media works exploring self-portraiture. Incorporating similar techniques to Peninsula, the works in this series are also concerned with process. The video sequences constitute a range of different approaches to self-depiction. Using projections and mirrors, Bourn presents the process of self-portraiture as a developing narrative, in which self-image is continually under review and re-inventing itself.