X-rated and avant-garde; 100 years of film history at the Old Cinema 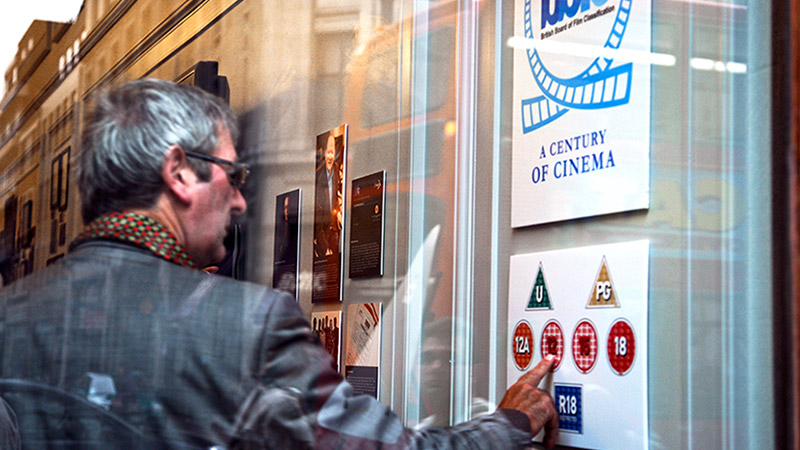 The exhibition opened on 11 June at the historic Regent Street headquarters and charts the birth of film censorship and classification alongside the unique heritage and various incarnations of the Old Cinema. Established as the British Board of Film Censors in 1912, the BBFC was designed by the film industry to ensure uniformity in film classification and was a reaction to the Cinematograph Act 1909 whereby all Local Authorities had the power to provide or withhold licenses for cinemas in their area. The Old Cinema at Regent Street has been pushing cinematic boundaries since 1896. Its history is filled with firsts; the first venue to show a moving film to a UK paying audience in 1896; the first polytechnic to offer a cinematography course in 1933; and the first to show an X rated film,  Life Begins Tomorrow (La Vie Commence Demain), in 1951.

The University of Westminster is also connected to the BBFC thanks to its relationship with long-standing BBFC Director James Ferman, who wrote articles for the Poly Law Review in the 1970s, published by the University of Westminster School of Law. Today the school continues to produce innovative work on both film and law, some of which is highlighted in the exhibition.

Guy Osborn, Professor of Law at the University of Westminster says: “Inevitably public attitudes and values towards the censorship of British film have changed considerably over time as new concerns emerge and old ones become less significant.”

“This exhibition shows how these sensitivities have influenced the making of cinema during the last 100 years. In addition, it gives us the unique opportunity to showcase a number of exciting artefacts from the depths of the University’s archives and showcase the innovative work at the University of Westminster School of Law.”

Items from the University’s archive include material related to the Lumiere brothers’ demonstrations and illustrations of the cinema’s prolific history as a venue for X-rated and avant-garde films. The film director Barney Platts-Mills has kindly supplied photographs and a poster relating to the ‘lost mod classic’ film Bronco Bullfrog, which was premiered at the Cinema in 1970. The story behind this screening provides a central part of the exhibition focusing upon ‘Programming, Premieres and Protests’ . The exhibition also features early BBFC artefacts such as images of the first BBFC Presidents, T.P O’Connor’s 43 Rules for Deletion as published in 1916, through to cuts books from the 1950s and original film examiner reports, as well a superb example of a film category board supplied by the Cinema Museum in Kennington. The BBFC’s history is shown in parallel, and intersecting with, that of the University of Westminster, showing how film censorship impacted on early cinema-going in London.

David Cooke, Director of the BBFC says: ‘A lot has happened over the 100 years of British cinema and the exhibition reflects the changing nature of both UK cultural life and the BBFC. The BBFC made a fresh start in 2000, putting child protection, public consultation and transparency at the heart of our approach; but our concerns, practice and expertise have been evolving for much longer, and are a sort of tracking shot of a century of British history. We hope this exhibition will bring to life the links between social and cultural life, as well as the BBFC’s academic and cinematic links to the University of Westminster and its Old Cinema.’