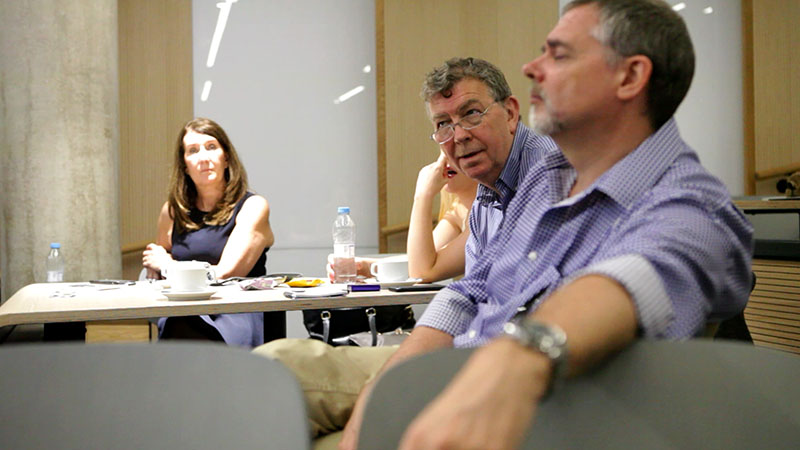 One of the UK’s most senior and respected journalists, Nick Pollard hailed the new creative storytelling programme at the University of Westminster as “terrific and incredible”, adding he was so impressed he has signed up to be a mentor on the programme.

Reviewing the students’ final projects, Pollard said: “After spending nearly fifty years in the media industry. I found it fascinating to see the incredible variety of approaches that were adopted by students. For me, the eye-opening thing was that they were able to combine new ways of looking at journalism with genuine creativity and user immersion.”

One of the story forms that caught his attention the most was an Instagram series featuring top flight and Olympian athletes, and how they cope after their sporting careers. The author, MA student Sofija Korp, herself a Lithuanian champion long jumper, conceived the idea with the support of the LAB and has since built a community on social media. Pollard was so impressed he put her in touch with a sports branding agency.

Other guests reviewing the next generation of storytellers included the Guild of Entrepreneurs, who were the group’s mentors and will participate in next year’s programme, and Motif Agency, a respected digital company with offices in London and Doha, Qatar.

The latter showed its support to MA student Nasma Aljizawi whom, through working with the agency, built an immersive mobile game which explores the journey of refugees fleeing their homestead. Nasma was recognised by the agency head team, Fadi Haddad and Abdul Jizawi, and her mentor Stephen Wheatley, a revolutionary innovator in headphones.

An online contemporary Russian women’s site, a non-linear podcast, and a mobile app that compares data and stories between young Chinese and English first time home seekers, were also amongst the most highly-praised projects.

Russian women’s site author, Elishka Fialova, redefined the aesthetic and reception of affluent professionals and was praised by her mentor Judy Hadden, an Oil Insurance specialist.

Non-linear podcasting, presented by Jasmin James, introduced a future of podcasting through the use of binaural headphones.

Bowen Sun, creator of the mobile app that compares data of first time home seekers, has been recruited by HSBC’s global graduate programme and is set to join the banking industry in August 2018.

Talking about the programme, Dr David Dunkley Gyimah said: “This is what we envisaged, a place where students could disrupt, and experience, as well as push at industry developing innovative and resilient creative skills. Next year we plan to cement these as well as build on some exciting ventures.”

Find out more about the Digital and Interactive Storytelling LAB (disLAB) MA course offered at the University of Westminster.