The ON-TRAK Fellowship is a structured twelve-month residency programme to support and launch an aspiring University of Westminster graduate entrepreneur. 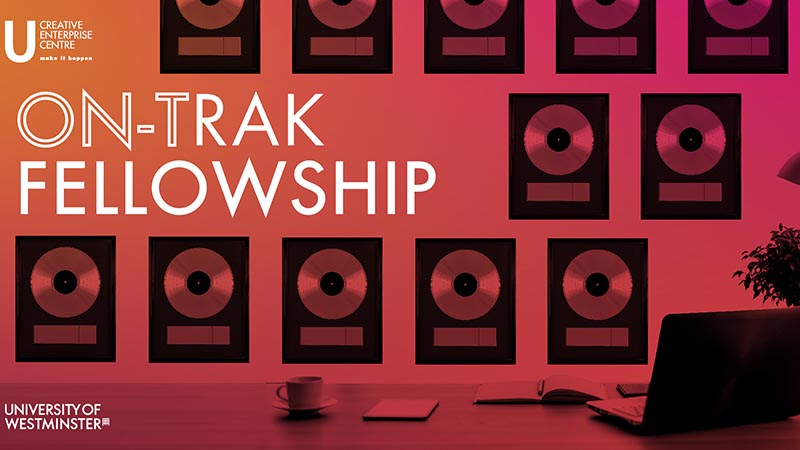 In partnership with RAK Studios, the University of Westminster’s Creative Enterprise Centre (CEC) will award a recent graduate with a viable business idea with one year’s free working space at the world renowned RAK Studios; structured mentoring, business advice and a £1000 prize.

The ON-TRAK fellowship is part of the CEC Westminster Graduate Venture Programme, which acts as a Launchpad for the University’s student and graduate entrepreneurs, enabling them to build and grow successful and viable businesses.

RAK Publishing & RAK Studios were founded by English record producer Mickie Most in 1969 and 1976 respectively. As one of the best-known recording studios in the UK, RAK has previously worked with artists such as Take That, Sam Smith, Alicia Keys and Radiohead, Robert Plant, Mumford & Sons and Royal Blood. Clients from film, TV and press include BBC, ITV, Channel 4, Sky Arts, RTE, Spotify, O2, Beats and Sofar Sounds.

The inaugural ON-TRAK Fellowship is open for all University of Westminster graduates who have graduated within the past three years. To apply, complete an online application form, which requires submission of a two-minute video pitch and business model canvas. Applications are open until Monday 5 November.

The Creative Enterprise Centre will also be running workshops on the Business Model Canvas on the 24 October and 29 October.

Apply to the ON-TRAK Fellowship.

Find out more information about the Fellowship.