David Morris, the University’s Assistant Interfaith Advisor, is hosting a talk about his nine month experience living in a Buddhist monastery and what it’s like to be ‘Back in the World’. 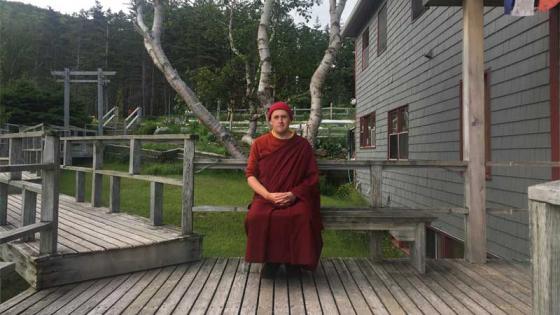 The talk, entitled ‘Back in the World’ will take place on 30 October from 6pm at our Regent Street site.

In October 2018, Morris began a nine month residency at Gampo Abbey, a Buddhist monastery on the remote Cape Breton peninsula in Nova Scotia, Canada. During his time there he was ordained as a monk and practiced a daily schedule of meditation and service to the community. This meant living by the vows of a novice monastic and learning from the Buddhist nun, teacher and community founder Pema Chödrön.

In the talk Morris will discuss his experiences of the retreat and his return, after being asked how it feels to be “back in the world”. He will also explore the other seemingly opposing notions of living as a Buddhist monk such as discipline and freedom, and the mundane and sacred. He will explore these categories as now less distinct than he had previously thought.

As part of the talk Morris will be sharing wildlife photos and asking questions, with an open invitation to the daring and critical. He will also be dropping numerous quotes from Leonard Cohen, who himself spent seven years living in a Zen monastery.

The Interfaith team at the University offer support to students and staff, as well as other institutions like prisons and hospitals in their roles as chaplains. They are committed to embracing diversity and promoting equality among students and staff with regard to their religious or philosophical beliefs, or lack of beliefs. This includes providing support and representation and a respectful environment for people to express their beliefs.

Morris said about the process of preparing the talk: “I initially viewed the idea of giving a talk as “paying back” the gift, having returned from a year of unpaid leave, but as the event drew closer I recognised that it was becoming part of my own process of transitioning. As I planned the talk, I re-engaged with aspects of the experience that had been lying dormant beneath the hustle and bustle of the life I returned to, and this was helpful. When I gave the initial talk to staff, the questions asked by attendees illuminated aspects I had overlooked.

“I realised that in sharing this meaningful experience I was receiving another gift; a bridge over which some of that meaning crossed the gap between “there” and “here”, made possible by the interpersonal connections in the room and the genuine, curious questions. I hope that some of this feeling of liberation was shared by the audience, and I also hope for more questions when I give the talk publicly at Regent Street campus on October 30th”

Find out more about faith and spirituality at the University of Westminster.