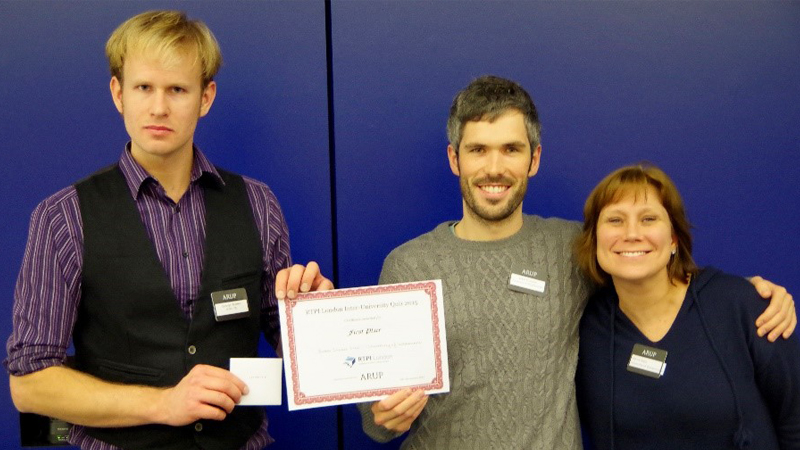 The event brought together six teams from London universities including the University of Westminster, University College London (UCL), London School Economics (LSE) and London South Bank University (LSBU), in addition to a team from Newcastle University whose members are currently undertaking work placements in London.

The University of Westminster team, called ‘Baker Street Duo’, consisted of John Cooney, Urban and Regional Planning MA student, and Marcia Klein studying on the International Planning and Sustainable Development MA course. Despite being the smallest team on the night, the pair were tied for first place with LSBU at the half-way point of the quiz, and pulled ahead in the later stages to beat their southern rivals by a narrow margin. Newcastle University claimed third place. The first prize consisted of a £50 Book Voucher and tickets to the 2016 London Planning Awards which will take place at City Hall in early February next year.

One half of the winning Westminster team, John Cooney, said: “It was a great honour to represent the University, and the knowledge we gained in our recent lectures definitely gave us the edge with many of the questions asked.”

RTPI London Chair Charlotte Morphet said: "The Inter-University Planning Quiz was a great success and we want to congratulate the University of Westminster team for beating the competition. We hope to make it an annual event. We would encourage students to check our RTPI London website and blog for our upcoming events.”

The Royal Town Planning Institute is the UK's leading planning body for spatial, sustainable and inclusive planning and is the largest planning institute in Europe with over 23,000 members. Student membership of the RTPI is free and they organise several planning-related events for their members.

The University of Westminster is one of the UK's leading centres for the study of Architecture and the Built Environment inspiring more than 2,000 students at its teaching base at Marylebone, in central London.