The University of Westminster graduate runway show will kick off the Graduate Fashion season in glamorous style on Thursday 22 May when its Fashion Design BA Honours students will be the first to debut their collections at the Ambika P3 venue in central London. 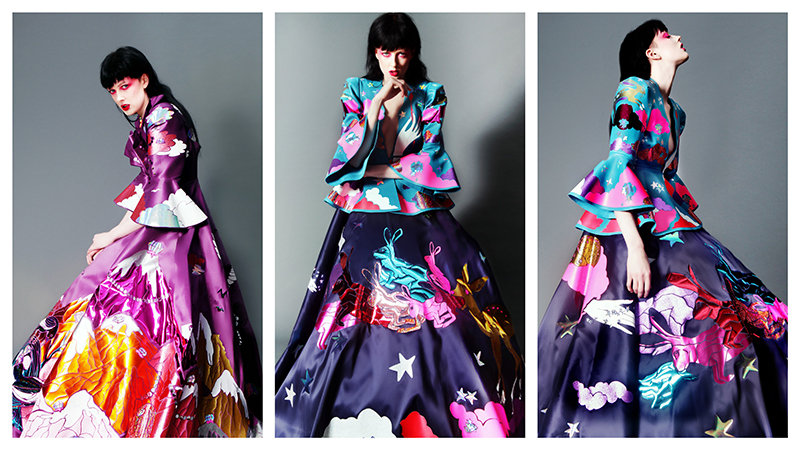 The University of Westminster runway shows are eagerly anticipated in the fashion world and the Fashion Design BA Honours course leads the way in producing eminent and creative designers who work across all levels of the international fashion industry.

Twenty-three year old Mary Benson, who has already worked for designers such as Alexander McQueen, Richard Nicoll and Vivienne Westwood, is among the third year students who will showcase their collections. Mary formed her self-named label in March 2012 and her designs have been worn by celebrities such as Rita Ora, Paloma Faith, Ellie Goulding, Little Mix, Brooke Candy, Gemma Cairney, VV Brown, Tavi Gevinson and The Noisettes.

For her graduate collection, Mary has been inspired by a melange of references including 70s cut out psychedelia, trance states, dreams, fairytales and Kate Bush. The clothes house fantastical landscapes of print, worlds that the wearer will want to inhabit. The collection has an ethereal quality with a myriad of imagery; warrens of floating rabbits, drifting hands and crystals positioned on mountain peaks. The prints are emblazoned in her signature holographic and bold matt colour. Mary’s final collection signifies a return to womanliness and a re-invention of the ladylike silhouette.

Last year’s graduates are already working with prestigious international companies such as Louis Vuitton, Givenchy, Asprey, Timothy Everest, Max Mara, H&M, and Aitor Throup to name a few and the 2014 graduates are also set to follow in their footsteps.

Among last year’s graduates, alumna Louise Alsop debuted at London Fashion Week in February as part of Fashion East, and Aaron Tubb whose own brand Bazar-14 is now stocked exclusively in Selfridges in London as well as in New York, Los Angeles, Tokyo and Milan.

Andrew Groves, Course Director of the University of Westminster's Fashion Design BA Honours course, said: “This year’s graduates have shown exceptional creativity and imagination which has been translated into their debut runway collections. Their time with renowned international design houses during their years at the University of Westminster have been, without doubt, enriching and rewarding experiences and we look forward to a first class graduate show in May.”