Westminster students get industry insights from The Telegraph staff

Students from the University’s Westminster School of Media, Arts and Design (WSMAD) recently got the chance to attend an afternoon of career training sessions organised by the Telegraph Media Academy. 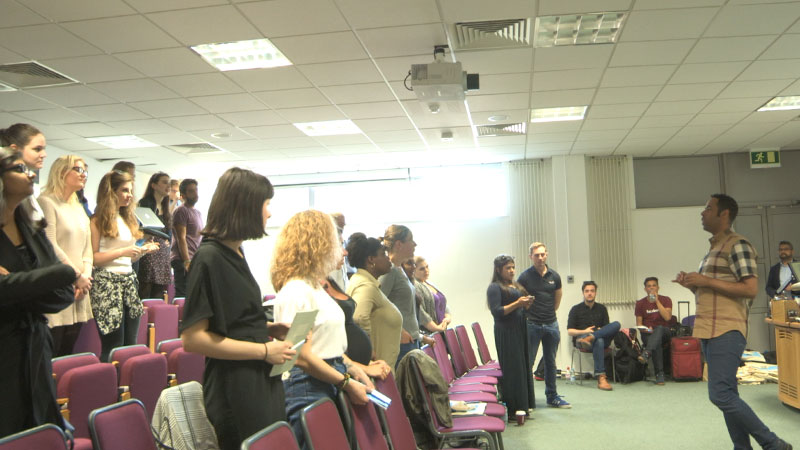 Staff from the Telegraph Media Group visited Harrow Campus to deliver the sessions, which were specially designed to help students when applying for jobs at established media companies.

Attended by both undergraduate and postgraduate students from the Department of Journalism and Mass Communication, and the Department of Photography and Film, the day started with presentations from Telegraph Media Group staff Colin Campbell-Austin and Mirage Islam. They introduced students to the Telegraph Media Group and its various cross-media activities, explaining that it is now more than just a newspaper. Students learnt about how media jobs have been changing over the last decade, and the range of opportunities this has opened up. They also heard from young filmmaker Riffy Ahmed about how she broke into the business.

Speaking about how beneficial the event was, third-year Journalism BA student Daisy Greenaway said: “The day was a great opportunity to get advice from people currently in the industry, and ask questions you couldn’t ask tutors. The group activities were fun and made me feel more at ease about my future applications.”

As part of the training sessions students had the opportunity to have mock one-to-one interviews, video interviews, a group debate and learnt about managing their digital footprint. At the end of the day the students received helpful feedback from The Telegraph team.

Telegraph Media Group (TMG)’s Colin Campbell-Austin said he was “blown away” by the students he met and the TMG Academy team are in discussions with WSMAD staff about a plan to run the sessions again over a whole day, at some point in the next academic year.

An initiative aimed at both attracting new talent from outside TMG and nurturing and developing new staff already working there, the Telegraph Media Academy offers placements and internships and runs a range of learning and development programmes aimed at building career skills.

With one of the most varied portfolios in Europe, the Westminster School of Media, Arts and Design prepares students not just to enter the creative industries but to shape and lead them.