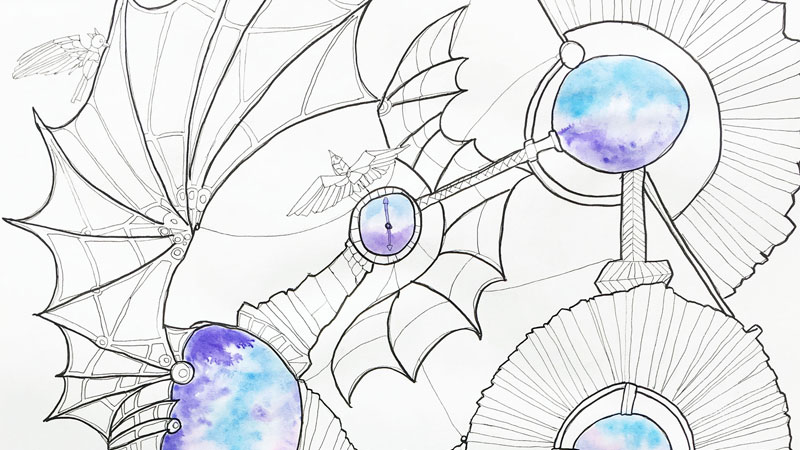 Heath Robinson Museum is known primarily for the cartoons of bizarre machinery that have caught the public’s imagination. His work celebrates the absurd, eccentric and human need to invent.

For the competition Aysha created three illustrations that covered creatures of air, sea and land and was voted as ‘most wanted to develop a final piece’ for the gallery’s exhibition in 2017.

Her idea was to help species in danger of extinction and give them a survival advantage by surrounding them with over-elaborate technology or mechanised habitats.

The Museum commented: “This entry was chosen as it was very much in keeping with the way Heath Robinson worked: It looked at a contemporary problem and took the solving of this issue to this most absurd and ‘Heath Robinson’ conclusion.”

Aysha collaborated with Jim Ledesma also an Illustration and Visual Communication student at the University of Westminster for her final work which is now exhibited at the Heath Robinson Museum.

Jim produced a 3D realisation of Ayesha’s original concept where the whole of the Earth’s Life Cycle is represented in a ‘Heath Robinson Fashion’. When speaking about the project he said: “The whole idea behind this piece was of the feeling of cycling and flow from one element to another.”

The piece reflects the basic scientific concepts of life: both the water cycle and the carbon cycle where energy transfers from the sun and then through the different elements of creating life. This cyclic nature also mirrors the art of Heath Robinson, where either the narrative details or the composition of the artwork cycles around the whole of the surface, taking the eye to linked details.

Learn more about Illustration and Visual Communication BA Honours course at the University of Westminster.

Find out more about the Heath Robinson Museum.