Dagmar Zvonickova, studying on the Master of Architecture (MArch)(Riba Pt II) course, travelled to Sydney for the last round of the 6th International Student Tall Building Design Competition, where she was announced the winner of the first prize. 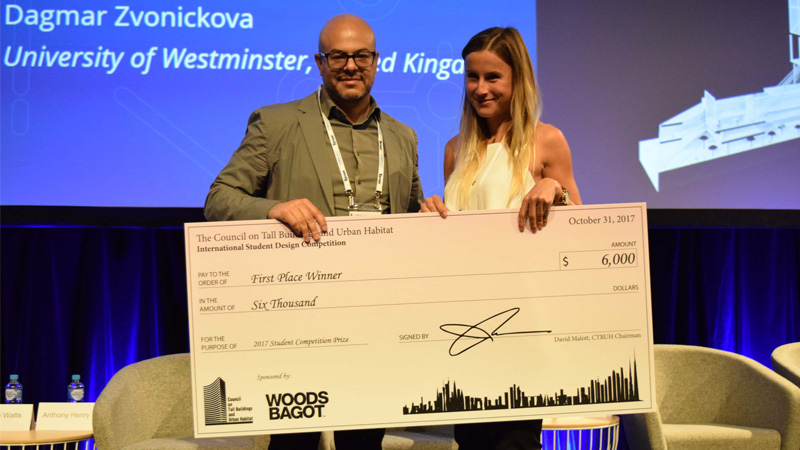 The brief of the competition for this year inspired participants to re-think the way tall buildings operate today. Under the theme Connecting the City: People, Density, & Infrastructure, the finalists had to imagine how tall buildings could support vital elements of urban infrastructure — traditionally restricted to the ground level — also in great heights, continuing the city up and into the building, and thus contributing to increased density. Participants were free to locate their buildings anywhere in the world, without under-evaluating the importance of its site.

Dagmar Zvonickova entered the competition, organised by the Council on Tall Buildings and Urban Habitat, with a project she had worked on in the first year of her studies in Design Studio 13 under the guidance of her tutors, Andrei Martin and Andrew Yau. Her work, named Hong Kong: The city of dual perception, aims to disrupt the normative internal spatial characteristics of an office tower, by injecting a public domain in a form of a vertically curated art gallery.

Describing the design of her award-winning project, Dagmar said: “Cutting through the individual repetitive floor plates, the dynamic inner void disturbs the working environment inside, while in the same time allowing the public to engage with art in a new and counterintuitive way.”

Dagmar’s entry was one of 229 initial submissions and after successfully passing the first round of the competition, she was invited to present her work along with the other four finalists at the Council of Tall Buildings and Urban Habitat Conference in Sydney. There was another entry from the University of Westminster, which made it to the last round of the competition, and the three remaining were from Anhui Jianzhu University, Inner Mongolia University of Technology, and Xi'an Jiaoton-Liverpool University.

The focus of the Conference was on the future development of tall buildings and it encouraged participants to look at tall buildings beyond being just icons, but rather becoming the connectors in the city. The presentations and discussions at the conference covered various categories - from urban planning and cost consulting architectural design to vertical transportation and real estate development. Dagmar also had the opportunity to participate in networking events which took place in different locations around Sydney as well as the on-site conference programmes, which were exploring some of the city’s biggest landmarks.

Speaking about her prize and the experience, Dagmar said: ''Being awarded the first prize definitely encouraged me and motivated me to do my best during my final year here at the University of Westminster. Being part of the CTBUH conference has also opened up many opportunities for my future career development, which I am incredibly grateful for.''

While still at University, Dagmar has already kick-started her career by launching Identity Design Studio in collaboration with her friend, Ivana Linderova. The studio is based in London and the creative duo have already taken up some exciting projects.

Learn more about studying on the Master of Architecture (MArch)(Riba Pt II) course.