Twenty final year students from the Real Estate BSc Honours course, together with University of Westminster staff, completed a five-day trip to Bucharest as part of the International Property and Planning Practice module. 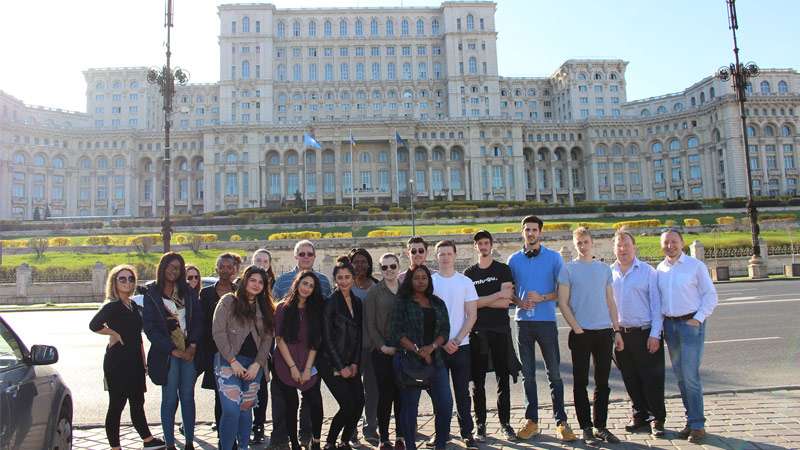 The visit was organised by Dr Gheorghe Multescu and Mike Lister, Senior Lecturers in the Faculty of Architecture and the Built Environment, together with Mike Pain, Course Leader on the Real Estate BSc Honours programme, and was made possible with funding from the Quintin Hogg Trust, available for field trips within the Department of Property and Construction.

The students enjoyed presentations from property development and investment firms in Bucharest, including Jones Lang LaSalle and Globalworth, which is the leading local office-space provider in Bucharest with a portfolio of over 17 new office buildings from the highest grade.

Visits to several office developments and new retail sites in Northern Bucharest were organised, such as Promenada and Mega Mall. The group also met academics from the University of Architecture and Planning, Ion Mincu, for a half-day programme of lectures on Spatial Planning and Urban Regeneration strategies in Bucharest.

The trip also included a day-trip to the Peles Castle in Sinaia, a former Summer Royal Residence of the Romanian Royal Family, and a guided tour of the Houses of Parliament, the second largest building in the world after the Pentagon.

After their return to London students will work in groups to write a field trip report including a market entry strategy to launch a property business in Bucharest.

See all courses in the Department of Property and Construction.