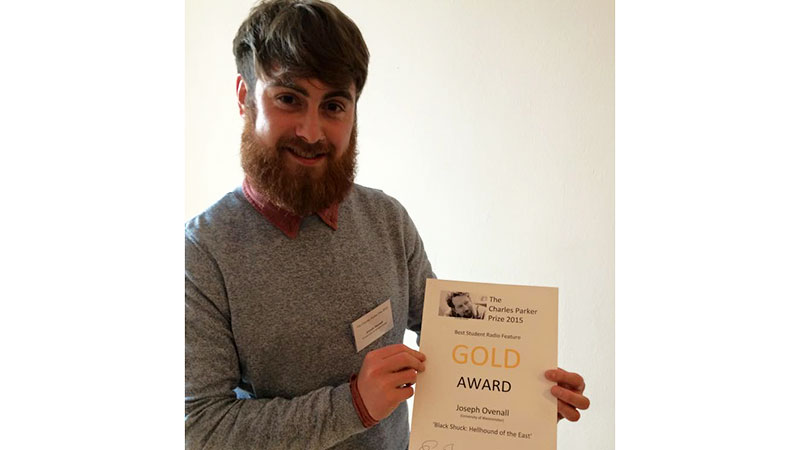 The award was presented at the Annual Charles Parker Day in Glasgow while competitors from the University of Sunderland and Goldsmiths took Silver and Bronze.

This is the second year running that a Westminster student has been awarded this prestigious prize with Adam Allinson winning Gold last year with his feature ‘Beachy Head - Life on the edge’.

Joe’s feature Black Shuck, due to be broadcast on BBC 4Extra in May, is an exploration into the strange and mystical behaviour of Black Shuck, the Devil’s dog. Legend says, he lurks along the Norfolk and Suffolk coastline. Old Shuck is a menace to anyone who crosses his path.

The Chairman of the judges, Simon Elmes said:

‘We were very impressed with Joe's piece. Historical pieces are always difficult to pull off effectively without becoming plodding. Black Shuck never strayed into that territory, and the virtuoso ending was cracking. All the judges put it right up there, so we were very happy to award it first prize.’

Joe has won a two-week placement at BBC Radio 4 features and a copy of the editing software package, SADiE.

The Annual Charles Parker Day is a conference honouring the work of the influential BBC producer, best known for the series ‘The Radio Ballads’. Charles Parker has a Westminster connection as he taught at the University (formerly the Polytechnic of Central London) from 1967 up to his death in 1980.