On Wednesday 6 January, the launch of the 2016 GO4SET Programme took place at the University of Westminster’s Marylebone Campus, home to the world-leading Faculty of Architecture and the Built Environment. The programme, which is supported by the University for the 2nd year, aims to inspire secondary school pupils to pursue careers in STEM subjects (Science, Technology, Engineering and Mathematics). 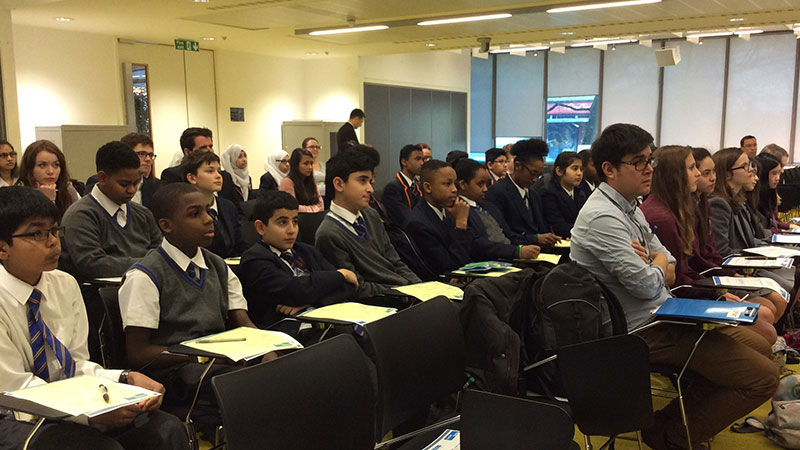 Over 40 key stage three pupils aged between 12 and 14 attended the engaging GO4SET launch event at Westminster, with representatives from Network Rail and EDT speaking to the pupils about careers relating to STEM subjects. GO4SET is an environmentally themed STEM project which forms part of a continuum of schemes administered by EDT with one common mission: to inspire students towards STEM related careers by linking education and industry in real life situations using hands on learning and skills development.

During the day, pupils were given a site tour of Marylebone station and had the chance to participate in an exciting group task teaching them the importance of project management and team work.

The pupils from five secondary schools across London, including King Soloman School, Grey Coat Hospital, City of London Academy, Harris Boys’ Academy and Central Foundation School, were introduced to the GO4SET project they will be working to complete as part of the programme.

The pupils will have 10 weeks to work towards and complete the given Stations for the future project asking students to identify a railway station, research its history and current operations and think of creative ways to make the station and the journey/customer experience better. Factors to consider may include environmental factors, sustainability, health and safety. Once students decide on a theme for their project, they must form a project team with specific roles, prepare a project plan, write a report and prepare a verbal presentation as well as a 3D model to support their ideas.

As part of the project, the pupils will also be provided guidance by two business mentors who will visit their schools every week. All the competing teams will come together in 10 weeks for a celebration event in April which will be held at the University of Westminster. Prizes will be awarded to the winning teams.

The EDT GO4SET project is supported by a number of companies including BP and Network Rail by BP and National Rail. By providing a real life STEM based project, Go4SET aims to raise pupil awareness through work related learning within an industrial context, and empower young people to make informed decisions about their future decisions.