Westminster Professor Lisa Webley is Law Teacher of the Year

Professor Lisa Webley of the University of Westminster has been named Law Teacher of the Year 2016. 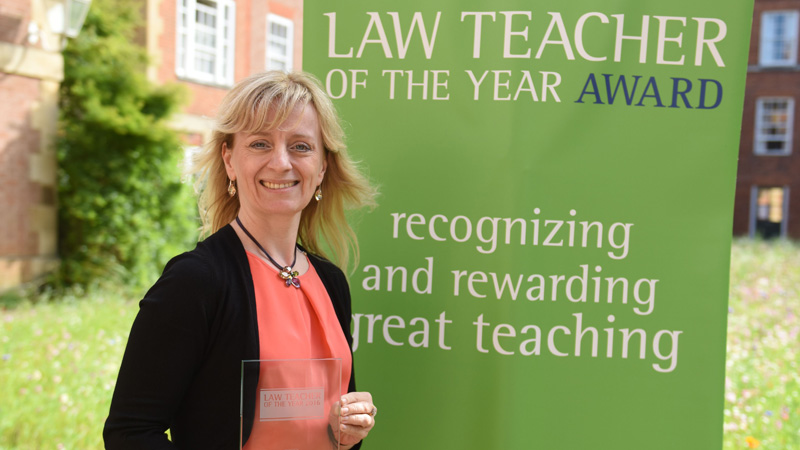 The prestigious national award, sponsored by Oxford University Press, was presented at the end of the Celebrating Excellence in Law Teaching conference held in Oxford on Friday 1 July 2016.

Professor Webley teaches Empirical Legal Studies at Westminster Law School. She impressed the judges with the way she weaves skills education into her teaching and fended off competition from the University of Oxford and University of Leicester.

Accepting the award, Lisa said: “This has been a wonderful opportunity to reflect on why we [teachers] do what we do, what we want to achieve, and what we stand for.” She gave special thanks to her colleagues and Elizabeth Duff, Head of Westminster Law School, for their openness to experimentation and creativity in teaching.

Six academics were shortlisted for the award. They shared the stage during a panel session at the conference, attended by over 70 law academics, explaining their differing approaches to teaching and gave delegates the chance to see exactly why they had been nominated.

The announcement of the winner came after a rigorous judging process which began in January. Nominations were submitted from almost half of the eligible law schools in the UK. After the selection of the six finalists, each candidate was visited by members of the judging panel, who conducted interviews with students and colleagues as well as observed a typical teaching session.

Finalists were judged on their approach to teaching, with the panel looking for a style that engages, motivates, and inspires students; the involvement of students in research or other academic activities to enhance their learning; and a commitment to the development and support of students. Judges paid tribute to all the candidates’ “commitment, dedication, passion, enthusiasm, and innovation”.

Professor Webley is the third teacher from Westminster Law School to have received this prestigious award, following in the footsteps of visiting lecturer in Contract Law, Luke Mason in 2014 and Professor Andreas Philippopoulos-Mihalopolous, Professor in Law and Theory in 2011, who was on the judging panel for this year's award.

Find out more about studying Law at Westminster.