Professor Graham Smith, Professor of Politics and International Relations in the University’s Faculty of Social Sciences and Humanities, has been appointed as Chair of Trustees for the Foundation for Democracy and Sustainable Development (FDSD), as well as Chair of the Research Committee of Participedia. 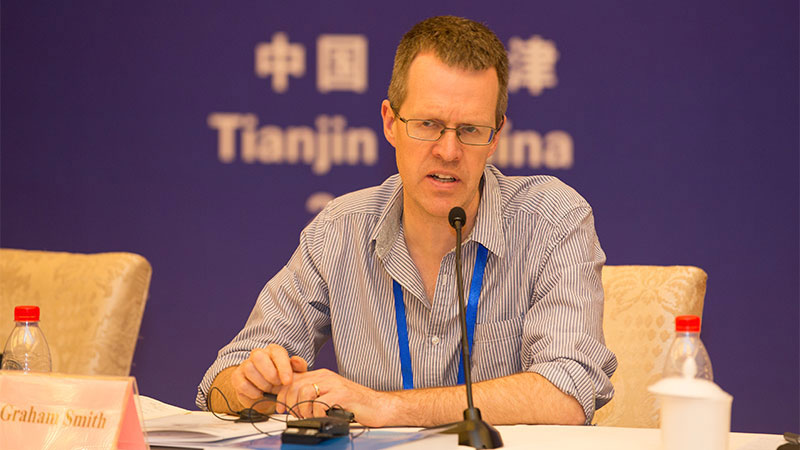 The Foundation for Democracy and Sustainable Development is an independent forum, which explores how democracies can adapt to achieve sustainable development. The Foundation contributes to practical solutions and ways forward.

John Lotherington, who was the last Chair of the Foundation, said: “We were delighted when Graham Smith agreed to accept nomination as Chair of FDSD. He brings to that role his deep understanding of democracy in its purest form – the participation by citizens in shaping their own lives and futures – which is essential to the political viability and justice in sustainable development.”

At the same time, Graham Smith has also been appointed as Chair of the Research Committee of Participedia. This is a global research partnership across a number of universities that is using new technologies to increase our understanding of participatory governance around the world. Participedia was originally established by Harvard University and the University of British Columbia.

The Project Director of Participedia, Mark Warren, said: "Professor Smith is one of the world's foremost experts on democratic innovations. He brings to the research directorship an unusually valuable skill set: he is deeply versed in democratic theory, research design, and both qualitative and quantitative methods. Professor Smith knows the project well, as he has been a collaborator with the project since its inception and has had a hand in its goals and design.”

Speaking about his new roles, Professor Smith said: “I am privileged to take on these two roles, both of which will involve working closely with some wonderfully committed people around the world. Participedia and the Foundation for Democracy and Sustainable Development together capture the full range of my academic and political interests. It will be an exciting few years.”

Professor Smith also runs the pilot Assembly South of the Democracy Matters project which is part of a campaign for a citizen-led constitutional convention in the UK. The Assembly brought citizens and local politicians together in the Solent area to consider the implications of a ‘devolution deal’ in the region.

The Democracy Matters project will launch its findings in parliament on the 13 April.