A student from the University of Westminster has broken a world record, solving the 4x4 Rubik’s Cube in 2 minutes 10.47 seconds. 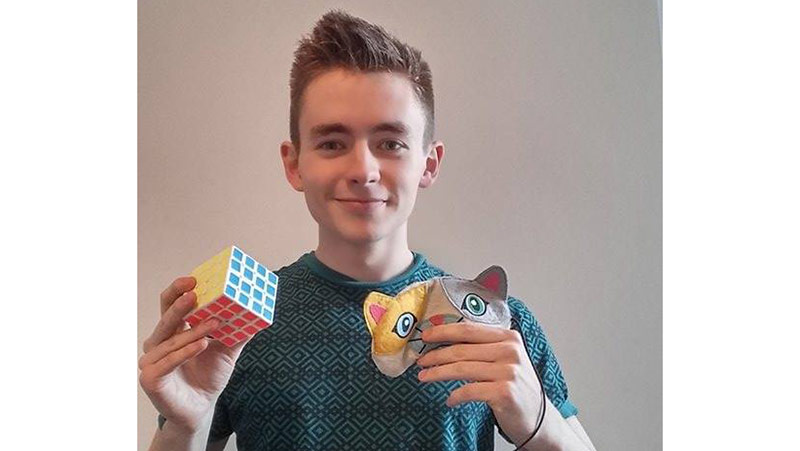 Oliver Frost, a third year Cognitive Neuroscience BSc Honours student, not only broke his own world record of 2 minutes 18.65 seconds, but did it blindfolded. This is Oliver’s fifth world record so far.

Describing how he could complete the puzzle blindfolded, Oliver gave valuable insights into his technique. He revealed that he used a method called '3-cycle commutators', which means that he applied moves to the cube that cycle three pieces at a time. Once he had memorised what the cube looked like and where each piece needed to go, he could solve at least two pieces with every new move sequence without affecting anything else on the cube.

In order to memorise where each piece needed to go, he assigned a letter to its sticker and used them to make a story.

“So for example, I might have to memorise six different letters for my corner pieces: ABHGCT. With some simple adjustments I can make the story: ABba HuGging a CaT. This is a little bit of a simplification, but the methods required to do this can be learned by anyone with access to YouTube and some time to kill,” explained Oliver.

The Faculty of Science and Technology student gained inspiration from his neuroscience and psychology studies by learning how to optimise the memory skills needed to master the Rubik’s Cube.

“Every neuroscience and psychology student eventually covers the topic of memory during their studies, often with a degree of reluctance. In fact, a lot of competitive blindfolded solvers have optimised their memory techniques using theories from neuroscience and cognitive research. For example, Baddeley and Hitch's famous working memory model states that we have different stores for visual and phonological information. The fastest 'blindsolvers' store information about a scrambled cube in different stores and in different forms at the same time,” said Oliver.

“This allows them to encode the information needed much more quickly. Myself and others have taken inspiration from research on semantic encoding, sports psychology and social psychology in order to improve our accuracy and speed.”

He added, “I have even based my final year project on the Rubik's Cube and its possible links to executive function.”

The 21-year old was given his first Rubik’s Cube four years ago by his brother as a Christmas present. Sibling rivalry pushed Oliver to practice intensively and he was soon drawn into the game on a larger scale. He began to compete in late 2012, when he won his first medal at the UK Championships for 4x4x4 blindfolded, and he has since broken five world records and 17 national records.

The third year student spoke of his future plans. “I may try to break my world record again in the near future and other world records such as the 5x5x5 blindfolded, which I achieved myself last year, but we will see once exam season is over.”