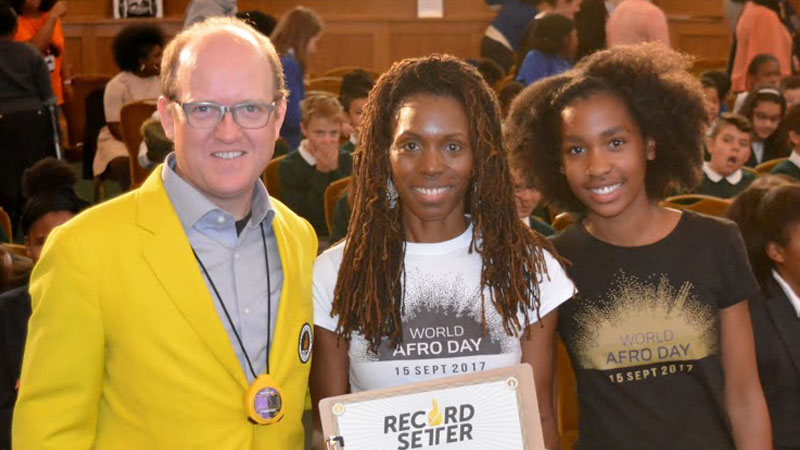 The first event was endorsed by the Office of the United Nations High Commissioner for Human Rights and the London Mayor’s Office which achieved widespread, international media coverage and global online engagement of 2.5 million coverage views.

The World Afro Day® 2018 event was particularly successful attracting high profile supporters including Supermodels Naomi Campbell, Christy Turlington and Iman. TV stars from ‘Real Housewives of Atlanta’, ‘This is Us’ ‘Holby City’, and Leicester City Football Club, also supported with Afros on social media in recognition of the initiative.

The event was a successful takeover, with high impact billboards by Ogily, Breakfast TV features on both channels, Newsround and ITV News in the evening.

During her visit at the United Nations, Michelle was given the opportunity to discuss global bias against Afro hair and talk about how her project is tackling the issue, through annual events and campaigns.

Speaking about her successful project, Michelle said: “I am so happy about how much people have embraced World Afro Day internationally and the progress that we have made. However, there is still a long way to go because there is a US law against dreadlocks, some people are denied jobs and children are excluded from schools; simply because of Afro hair. I encourage all students to believe that, they can make a difference too, which is what I hoped to do after I left university.”

World Afro Day will continue to educate and celebrate Afro hair, culture and identity throughout 2019, with the launch of ‘World Afro Day Foundation.’ A charity that will focus on research and education, aiming to reach 10,000 schools and 10 million children globally.

Find out more about the Digital Media and Communication BA Honours course offered at the University of Westminster.