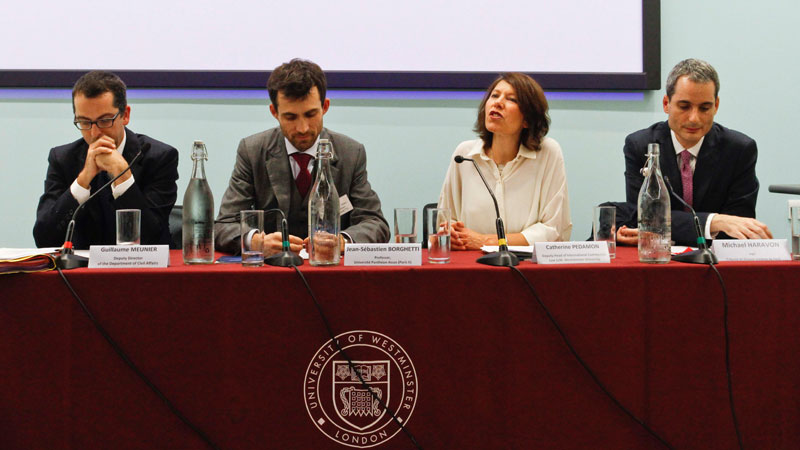 Participants were privileged to hear Guillaume Meunier, Deputy Director at the Department of Civil Law in the French Ministry of Justice, speaking about the spirit and methodology of the reform and the ensuing discussion was insightful and convivial.

An influential legal publication, The Law Society Gazette, reported on the high-profile conference and quoted Guillaume Meunier in saying, "the controversial reforms of France’s law of contracts will help the country export its jurisdiction as a forum of choice for commercial disputes."

Catherine Pédamon commented: "Our conference - like the reform itself - has afforded the legal community a historic opportunity to re-assess the all-important balance between contractual freedom and contractual justice. Vive l'entente légale!"

Speakers at the conference held at the University’s Regent Campus included Guillaume Meunier, Head of the Department for Civil Affairs at the French Ministry of Justice, who drafted the new provisions; Jean Sebastien Borghetti, Professor of Law at the University of Paris II (Pantheon-Assas); Michael Havaron, Judge at the Paris High Court - Tribunal de Grande Instance; and Catherine Pédamon, Deputy Head of the International Commercial Law LLM at Westminster Law School.

Title III of the French Civil Code on contracts has remained nearly untouched since its original iteration on 1804. Since that time French contract law has developed mainly outside the Code. After more than 200 years it became time to unify these rules by incorporating case law and other provisions into the Civil Code. The reform seeks to modernise and simplify contract law and to enhance its accessibility and intelligibility, all this with a view to reinforcing legal certainty and widening the influence of French contract law in Europe and beyond. The new law (ordonnance) is expected to be adopted in February 2016 after adoption by the Conseil des Ministres and approbation from Parliament.