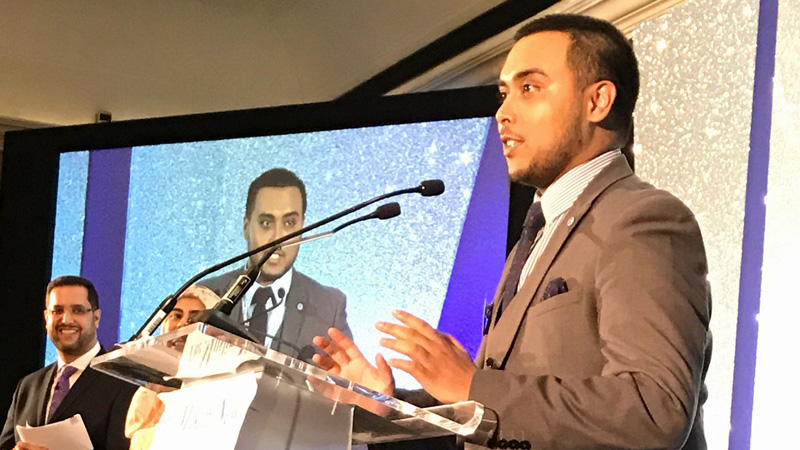 The Muslim News Awards aim to acknowledge British Muslim and non-Muslim contributions to society, and in particular, the Malcolm X Young Person’s Award category focuses on an individual, organisation or initiative run by young people whose principal aim is to support and create opportunities for their peers.

Shaheen most recently qualified as a Solicitor, and since graduating from the University of Westminster, he has worked tirelessly on his crusade to improve access to justice in the UK. He has been involved with a number of pro-bono and volunteering initiatives related to Human Rights, Civil Liberties and Social Welfare including the Habeas Corpus Project, a charity providing pro-bono representation to challenge unlawful detention in the UK.

Shaheen said: “I am often required to represent Clients who are from disadvantaged backgrounds and who are severely underrepresented due to challenging economy which has resulted in big cuts to Legal Aid and the legal sector therefore becoming more expensive to access for many. This is not only concerning but goes against the principle of a democratic and just society where everyone should be entitled to access justice fairly. Being awarded the Malcolm X Young Person’s Award for Excellence was made possible thanks to the University of Westminster where their dedicated level of student support and high quality teaching led to myself believing from an early stage that a lawyer can be an instrument to drive social change in society like ours. Most of the work and extra curricular activities I participated at the University of Westminster are now paying dividends and to which I am highly grateful for."

He also added: “The more young lawyers become socially active and raise awareness of injustice in the current climate, the fairer and just our society will become, especially to those from an underrepresented and disadvantaged background. From personal experience, it may involve a lot of hard work but if you stick to your passion and continue to push yourself with a positive attitude, you will succeed nonetheless. My time at the University of Westminster helped me to build my connections and encouraged me to stand for a noble cause which I strongly believe in.”

Shaheen has also received other numerous commendations in the field of Human Rights and Civil Liberties. He was previously awarded as Highly Commended in the Black Solicitors Network Rising Star category at the prestigious UK Diversity Legal Awards 2016, recognising and promoting diversity across the legal profession. Last year he received an award from the Mayor of Camden, Cllr Nadia Shah, and Deputy Sergeant for Camden, Sir Ian Johnston, at the Camden Volunteer Awards in recognition of his pro-bono commitments to his local community. He has also been shortlisted in the Junior Lawyer of the Year category of the Law Society Excellence Award 2016 and more recently the Young Achiever of the Year category at the British Muslim Awards 2017.