A delegation from Westminster Law School attended an international conference in Algeria to deliver the first phase findings of an international research project, “A Human Rights-based Approach to Higher Education in the Maghreb (ABDEM)”. 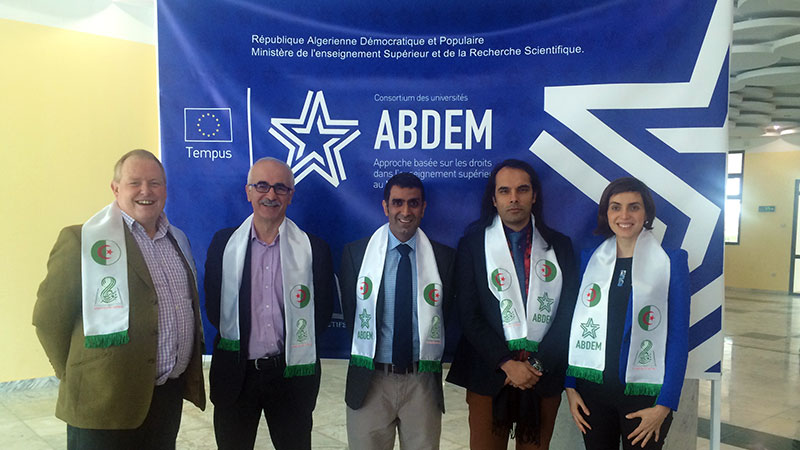 The EU-funded project has engaged the expertise of Westminster Law School alongside partner universities and research-led institutions in Spain, Italy and the Maghreb. The aim of the research project is to contribute to higher education programmes in the Maghreb region through the facilitation of a human rights-based approach (HRBA) to higher education based on the UN World Programme for Human Rights Education. This is not only in terms of curricula, but also potentially through university governance models that will ensure and promote the rights of all members of the university community.

The wide-ranging research project has been awarded approximately €1 million in EU-funding over three years. The funding has been provided through the TEMPUS scheme, the European Union’s programme which supports the modernisation of higher education in the partner countries of Eastern Europe, Central Asia, the Western Balkans and the Mediterranean region, mainly through university co-operation projects.

ABDEM is divided into three key phases. For the first phase, members of the project team at Westminster Law School collected widespread and extensive data on the rights-based approach to higher education in the United Kingdom, and together with other partners for their countries, produced a national report identifying good rights-based practices in the UK. After one year, these preliminary findings, together with draft national reports, were presented to delegates at the international conference in Setif, Algeria on 4 March 2015. The conference was attended by the Westminster Law School project group, Dr Paresh Kathrani and Margherita Blandini, and three members of staff from the Faculty of Social Sciences and Humanities, Dr Dibyesh Anand, Dr Farhang Morady and Dr Oliver Phillips.

"Westminster Law School is delighted to be able work with colleagues from the EU and the Maghreb on a human rights-based approach to higher education in institutions in North Africa. The University of Westminster has a proud legacy in promoting the rights of groups through education and looks forward to continuing this heritage in collaboration with colleagues."