The Westminster Institute for Advanced Studies (WIAS) hosted on Friday 3 March a discussion between Indian politician Shashi Tharoor and Professor Daya Thussu, Co-Director of the India Media Centre at the University of Westminster. 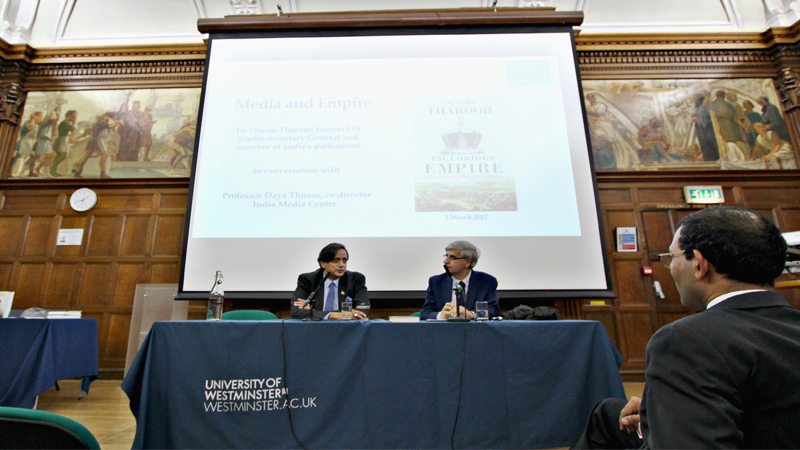 Shashi Tharoor, former Under-Secretary-General of the UN and current member of India’s Parliament, was invited by the University of Westminster to discuss the topics of Indian media and the British empire with Professor Daya Thussu, Co-Director of the India Media Centre.

The event marked the publication of Dr Tharoor’s new book 'Inglorious Empire: What the British Did to India', a work based on a speech the author gave at the Oxford Union in 2015, which went viral on YouTube.

His book examines the relationship between Britain and India from the arrival of the East India Company until the end of the Raj as well as the effects the British colonialism had on the Indian economy, legal system and society.

In a fascinating discussion with Professor Daya Thussu on the legacies of British rules for the media, Dr Tharoor pointed out that Indian media were thriving, with a global presence.

The National Indian Students and the Alumni Union UK concluded the event welcoming Dr Tharoor as their patron.

Find out more about the Westminster Institute For Advanced Studies.

Find out more about the India Media Centre at the University of Westminster.