Westminster Film and TV Production BA Honours 2014 graduates were the winners of the Royal Television Society (RTS) London Student Television Awards 2014 in the Comedy and Entertainment Category with their entry of 'Bun Oven'. Further Westminster students were shortlisted in the Factual and the Drama Category. 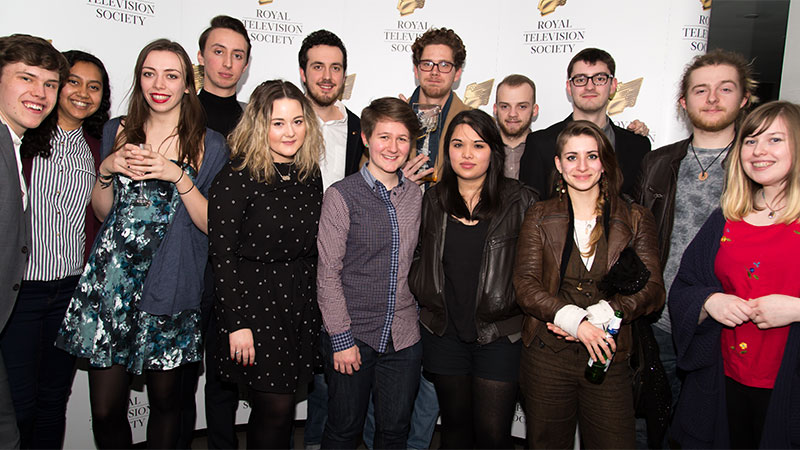 The 2014 RTS Student Television Awards were presented on 3 February 2015 at ITV Studios.

‘Bun Oven’, produced by Genia Krassnig, directed by Christian Cerami and written by Matt Tume, took home the award in the Comedy and Entertainment Category. The film tells the story of Janet, a workaholic who is fired late in her pregnancy, and her dramatic response. The jury felt this was a very professional production – well cast and tightly edited with fantastic performances, especially in the female roles – which kept them entertained throughout.

'The Wolf, The Ship and The Little Green Bag' was shortlisted in the Factual category. Directed by Kat McCorgarry Gray and produced by Cullum Carver-Jones, the film uses a mixture of animation and interviews to evoke the life-changing moments of three charming old ladies. The film also won the Audience Award at the recent Aesthetica short film festival, and was a collaboration between Westminster’s Film and TV Production BA Honours and Animation BA Honours students.

‘Chalk’, directed by Rem Berger, produced by Alex Sedgely and written by Nathalie Abbot was shortlisted in the Drama Category. The judges commended the 1960s period setting created by production designer Sam Reinders, and the cinematography of Alex Smith. Current 3rd year students Ashley Jackson, Rania Iraki, Molly Kitson and team were highly commended for their 2nd year film 'Lily and the Revolution'. Graduates of the TV Production BA Honours and Animation BA Honours courses were also nominated for awards in the Entertainment and Animation categories.

Commenting on this year’s award entries, Andrea Gauld, BBC Producer and Chair of the RTS London Student Awards 2014, said: “I have been really impressed by the quality and range of subject matter. I was taken on emotional journeys, introduced to new worlds and learnt some new things along the way. What most impressed me, however, was that this was all achieved on little to no budget. A high percentage of entries were certainly of broadcast standard and it is heartening to know that the future of the industry is in safe hands.”