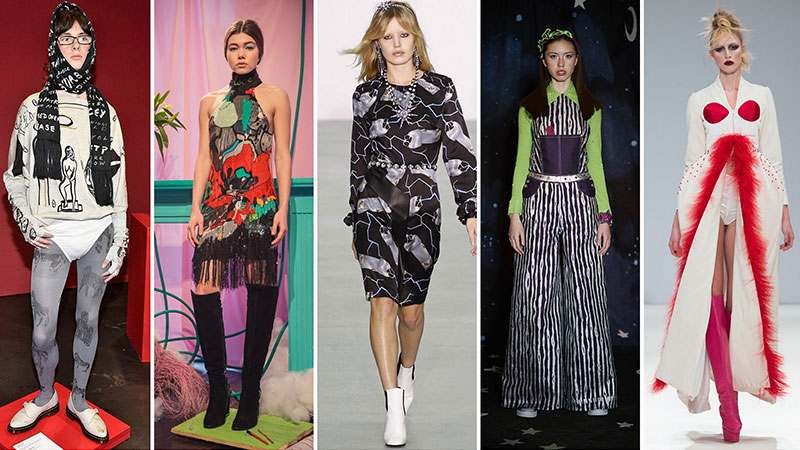 Despite graduating less than a year ago, Roberta Einer has made her London Fashion Week debut this week as the British Fashion Council’s NEWGEN One-to-Watch designer. Roberta is known for her intricate beaded dresses and her designs have already featured in American Vogue, Vogue Italia and Dazed magazine. Her Autumn/Winter 16 collection continued to showcase her obsession with beading and introduced a range of hand-embroidered faux fur coats.

David Ferreira also graduated in June 2015. After showing at New York Fashion Week in September 2015 and winning the Fashion Scout Merit Award this season, David presented his second collection at London Fashion Week this spring. Called Opulent Child, the collection is inspired by teenage films such as Mean Girls and Clueless. It features the sculptured silhouettes that he is famous for, along with a colour palette in clashing pink and red.

Graduate Ashley Williams showcased her new collection, which featured androgynous tailoring mixed with kitsch prints. Ashley graduated from the BA Fashion Design course in 2012. Since her graduation, her designs have gained a host of followers including Rihanna, Daisy Lowe, Pixie Geldof, Georgia May Jagger and Alice Dellal.

Claire Barrow, who was in the same class as Ashley Williams at Westminster, showed her new collection on Sunday featuring her hand-painted leather designs and hand-painted dresses, including a wedding dress painted with the image of another bride.

Mary Benson, who graduated in 2014, showcased her new collection at the 100 Club in Oxford Street. Her clothes have been described as ethereal and magical, and aiming to reinvent the female silhouette.

Andrew Groves, Course Director for the Fashion Design BA Honours course, said: "It’s fantastic that there were so many of our recent alumni showing at London Fashion Week this season. It’s exciting to see the sheer variety of designs and aesthetics that they are proposing and to see how they are being supported by the fashion industry through initiatives like the British Fashion Council’s NEWGEN awards."

Find out more about the Fashion Design BA at the University of Westminster.