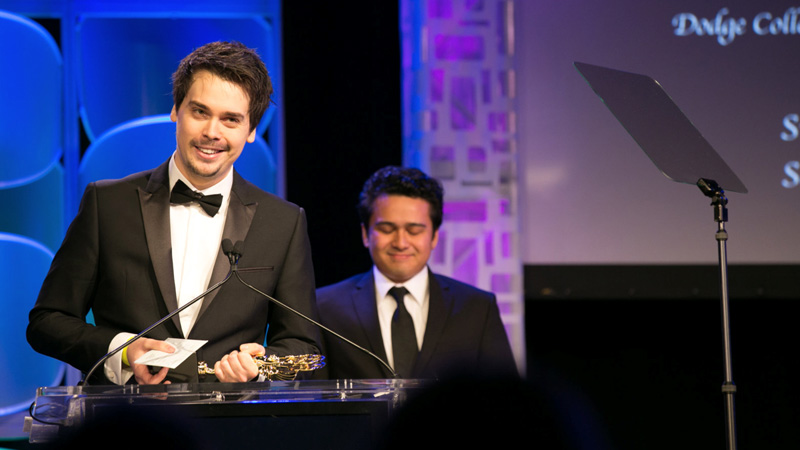 Zoltan was the supervising sound editor, foley artist and sound designer for the stop motion fairy tale in which an aquatic creature tries to win the heart of a sea-witch.

Speaking about the challenges he faced in the making of Fishwitch, Zoltan said: “There were many sounds that were not straightforward in how they should sound - we had to imagine and create them. We needed to make up things like the sound of magic and a fish singing underwater.”

He added: “I think our film won because we paid meticulous attention to all the little details and we were very precise. We also focused on storytelling, trying to trigger people’s emotions.”

,
Frame from the film Fishwitch
,

Zoltan won the Verna Fields Award for Student Film Makers. At the awards ceremony in Los Angeles, he brushed shoulders with the makers of La La Land, Hacksaw Ridge, Deepwater Horizon, Westworld, Game of Thrones and Arrival, to name but a few. Zoltan was presented his award by sound editor Liam Price, who won a Motion Pictures Sound Editors’ Golden Reel Award for Hacksaw Ridge, and also received an Ethel Crutcher Scholarship worth $1,500. Zoltan’s film was screened on awards night providing an exceptional opportunity to showcase his talent.

Zoltan says that he discovered his passion for sound editing and sound design during his time at Westminster. He said: “When I started university I thought that I wanted to be a film director. But then at Westminster I tried my hand at a whole range of things.

“I made a documentary in my first year and I made the sound for the film and that is how I found out that I like doing it and I am also good at it. From then on I was the ‘sound guy’ in our year. I had something to do with the sound of pretty much all the films made by my classmates and I spent the rest of my degree sound editing. By the time I got to my final year, when I was working on my graduation film it was obvious that I would be a sound editor. During my time at Westminster I got the chance to work on so many projects which all helped me to get accepted by NFTS.”

Watch the trailer of FishWitch.

Learn more about the Film BA Honours course at the University of Westminster.