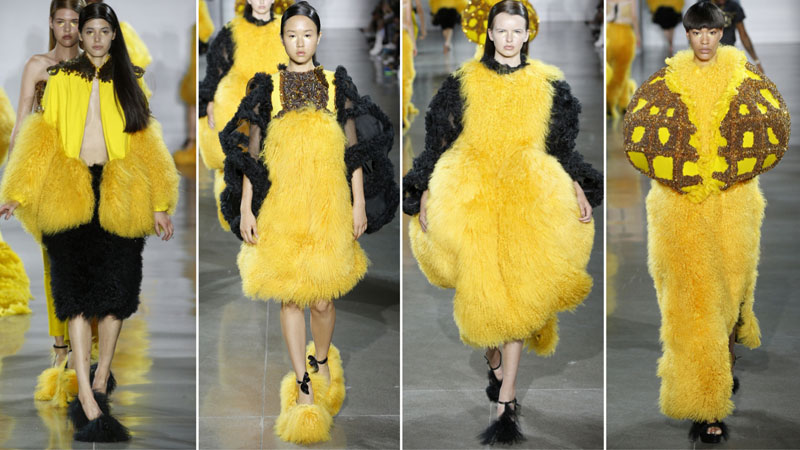 David, who is originally from Portugal, graduated from the course in June. His runway collection featured intricately beaded evening wear in a mixture of chiffon, wool, and shearling all in a shocking palette of bright yellow with accents of red and black.

The New York Observer said: “If you were to cast a casual eye over the collections shown at Wednesday night’s VFILES Made Fashion presentation, Portugal-born David Ferreira’s yellow and black confections would likely be named as the most high fashion or luxury. And with good reason; the couture creations made one’s mind go to designs from the likes of Giambattista Valli and John Galliano.”

Mr Ferreira himself cited Orlando and Empress Dowager Cixi. “All the inspiration is really in foot binding and mixing in the Victorian corsets from Europe,” he explained. “All the embroidery is inspired by the 1,000 cuts that Cixi made illegal in China. I really wanted to take that dark and ugly side and make it gorgeous and glamorous.”

The New York Times called Ferreira’s debut “a textured collection of outrageously feathery black and canary crinolines that had taken a turn down Sesame Street.”

MTV News said: “Closing out the show, David Ferreira showed a VFiles Made Fashion first: BALL GOWNS. Gloriously Big Bird-ed ball gowns, drenched in yellow fur and ruffles. This is what happens when the downtown cool kids get a hold of evening couture, and it is awesome.”

Womens Wear Daily noted “David Ferreira closed the show with grand, structural gowns and capes covered in furry material and ruffles. Everything came in a bumblebee pantone of black and yellow. “

Course Director Andrew Groves said: “This is an incredible achievement for someone who only left the fashion course four months ago. David is both talented and ambitious and I’m sure we will see a lot more of his wonderfully outrageous couture in the future.”