A number of Westminster Fashion Design BA Honours alumni have been awarded NEWGEN sponsorship for A/W16 by The British Fashion Council (BFC). 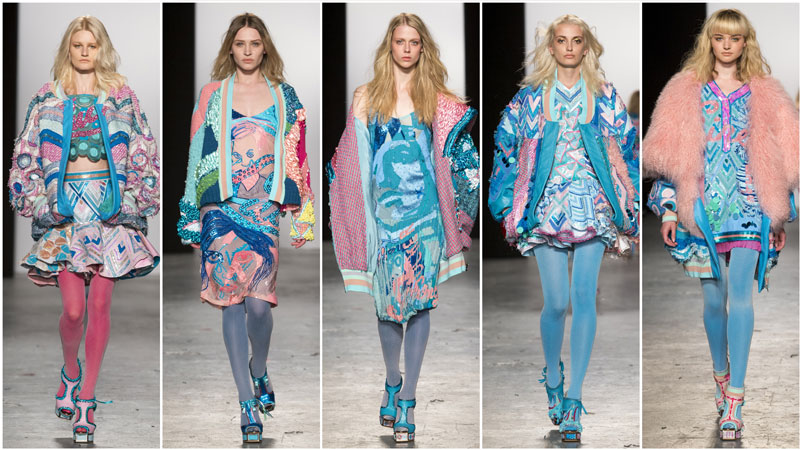 After scooping the award in the last season, Claire Barrow and Ashley Williams have been awarded it again this season, enabling them to showcase their AW16 collections at London Fashion Week (LFW) between 19 and 23 February next year.

Ashley William will host a runway show, while Claire Barrow will present her collection with a static display. They will also be allocated a dedicated pop-up showroom space within the Designer Showrooms at LFW. Both designers were stars of the Westminster runway show in 2012 and have since seen their designs worn by the likes of Rihanna, Harry Styles, Pixie Geldof, Alexa Chung, Alice Dellal and Julia Sarr-Jamois.

Meanwhile, Roberta Einer, who graduated from our Fashion Design BA Honours course in May this year, has been selected as the One-To-Watch for this season and will also be able to present an installation in the NEWGEN area within the Designer Showrooms.

Finally, Liam Hodges was awarded NEWGEN MEN sponsorship last month for next season’s menswear shows. The award, which is sponsored by TOPMAN, will see Liam showcase his A/W16 collection at London Collections Men in January 2016.

Sarah Mower MBE, BFC Ambassador for Emerging Talent, Contributing Editor to Vogue US and Chair of the NEWGEN selection, commented: “Thanks to the sustained support from Topshop and Sir Philip Green NEWGEN has been London’s prime generator of exciting talent for over a decade. The long-term pattern of success was again readable at this year’s British Fashion Awards, where former ‘graduates’ J.W.Anderson, Erdem, Mary Katrantzou, Thomas Tait and Jordan Askill swept the board. Emerging Talent nominations were also won by Molly Goddard and Faustine Steinmetz, who are still in the NEWGEN scheme, and will return with their remarkable presentations in February. They’re joined by Ashley Williams, Claire Barrow, Danielle Romeril, Marta Jakubowski, Ryan Lo and Sadie Williams, as well as Westminster University recent graduate, Roberta Einer, who steps into the One-To-Watch slot.”

NEWGEN is the BFC’s landmark scheme to support the very best emerging talents in a bid to build global, high end fashion brands for the future. The scheme offers designers financial support and showcasing opportunities at London Fashion Week to present their AW16 collection to influential press and buyers from around the world.

The University’s Fashion Design BA Honours course is renowned for continually producing individually distinctive, creative designers of the highest calibre, who work across all levels of the international fashion industry.