The University of Westminster’s Michaela O’Brien, Course Leader for the Media, Campaigning and Social Change MA and Senior Lecturer for the Public Relations MA course, has recorded the Christmas fundraiser single The Living Years as part of the London Hospices Choir. The song, featuring Paul Carrack on lead vocals, is listed as one of the main contenders for the Christmas Number One spot. 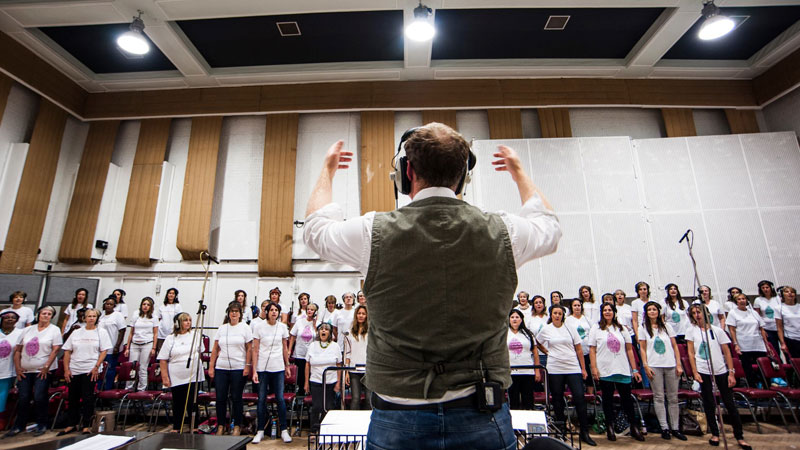 The new take on the classic track was recorded by a newly-formed choir of 300 patients, families, staff and volunteers from 18 hospices alongside Paul Carrack who was a lead vocalist on the original 1991 hit, to raise awareness of the hospice movement.

When speaking about the project, Michaela said: “I was thrilled to support the hospice movement, which plays such an important role in end-of-life care, and which has helped several members of my husband’s family. It was a huge privilege to sing in the Abbey Road studio where The Beatles recorded their hit Let It Be.”

The music video was shot under the direction of Annabel Jankel, top Hollywood film director with patients at Clapham’s Royal Trinity Hospice. The song is in the race for the Christmas Number One spot with Cruz Beckham’s If Everyday Was Christmas; Parliamentary Choir’s and Friends Of Jo Cox’s  You Can’t Always Get What You Want; Zayn Malik’s and Taylor Swift’s I Don’t Wanna Live Forever; X Factor Winner Matt Terry’s When Christmas comes around; and Greg Lake’s I Believe In Father Christmas.

Singer Paul Carrack said: “The Living Years has been an important song for me for many years, but this is the version that means the most. Recording it with this incredible special group of people for such a worthwhile cause has created some kind of magic.”

When talking about the campaigning aspect of the single, Michaela said: “Since the Arctic Monkeys first used social media almost 10 years ago to build a following for their music, platforms like Facebook, Instagram and Twitter, now create the opportunity for both musicians and charities to build popular support.

“By mobilising individual members of the London Hospice Choir to promote the single through their personal and professional networks, The Living Years has created enough attention to be in the running for this year's Christmas Number One. It’s one more example of how a good story, great timing and a clever approach to mobilising support online can generate awareness and attention for charitable causes.”

Learn more about Media, Campaigning and Social Change MA for which Michaela is Course Leader.

All profits from the sale of the single and the video will be divided between 18 hospices involved, helping them to support those reaching the end of their lives, and their families. You can pre-order the London Hospices Choir and Paul Carrack's The Living Years now on iTunes and Amazon. The song is officially released on Friday December 16. Best of luck to Michaela and the choir!

Spot Michaela in yellow T-shirt in the music video.