Professor Daya Thussu and Professor Hugo de Burgh, from the Westminster China Media Centre, delivered a presentation at the Royal United Services Institute (RUSI) on the globalisation of the Chinese media landscape. 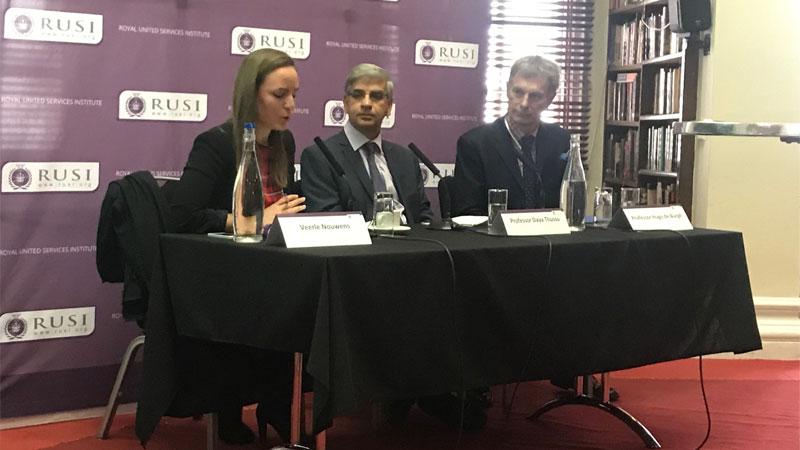 On Tuesday 10 April, two leading researchers from the China Media Centre addressed the UK’s premier security research body and an audience of senior officials from European embassies as well as security experts from the USA and many other countries.

During the seminar, Professor Daya Thussu and Professor Hugo de Burgh gave a talk on the domestic and international implications of the expansion of Chinese media and communications on the global media landscape.

Daya Thussu, Professor of International Communication and Research Advisor to the China Media Centre, spoke on how the unprecedented expansion of Chinese media is changing the global media landscape, just as China’s economic development is transforming the world. He also drew attention to the scale of China’s involvement with other countries.

Hugo de Burgh, Professor of Journalism and Director of the Westminster China Media Centre, emphasised how different China’s media are from the Anglophone media and how Anglophones must come to terms with an alternative conception of media. He gave an overview of the biggest media system in the world and the arguments that have taken place over the functions of the media since the establishment of the People’s Republic of China, which are still relevant today as China launches alternatives to BBC and CNN.

He said: “Although the take-up of China’s foreign language media is modest so far, it will grow. China trains the journalists of 146 countries and this will have an impact as much as the distribution of China’s media worldwide.”

The University of Westminster’s China Media Centre is Europe’s only organisation specializing in the world’s largest media system. It organises professional exchanges where visiting scholars, practitioners and students who are working or will work in their country’s media industry attend three to twelve-week courses to develop their media skills.

Since 2011, the China Media Centre has become the model for professional development in the international screen media industry. Every year participants return home to China with concepts that turn into successful programmes. The most famous are three broadcasts by Shanghai Media Group: Legendary Swordsman, Top Dog and Junior Edison.

Learn more about the China Media Centre at the University of Westminster.