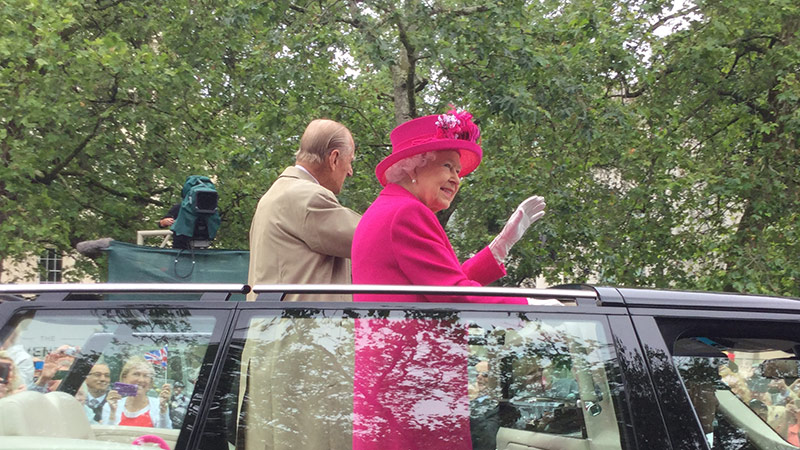 On Sunday 12 June, The Mall outside Buckingham Palace was transformed for its largest ever street party to celebrate The Queen’s patronage of over 600 charities and organisations – including The University of Westminster, one of only 23 universities in her patronage.

Braving the rainy weather, the Westminster team enjoyed a day of festivities, including a hamper lunch, a parade consisting of teams representing different decades, and meeting the members of the Royal family and some sunny spells.

Guests could wave and sing happy birthday to the Queen who drove down along The Mall alongside Prince Philip, wearing a bright pink outfit. Daniel Conway, Lecturer in Politics and International Relations at the University who has studied the Queen’s diplomatic dressing, explained that “the Queen often wears vibrant colours so she can stand out and people can see her easily. This is one of the many ways in which considerable thought and planning is undertaken about the Queen's wardrobe for official duties.”

Prince William and Kate, The Duke and Duchess of Cambridge, as well as Prince Harry, also walked down The Mall to shake hands and chat with guests at the lunch.

The Queen becomes the University of Westminster’s Patron

Her Majesty’s patronage of carefully selected organisations helps to recognise their achievements and the contributions they make to the many different sectors of public life in the UK and across the Commonwealth.

Established under the chairmanship of the distinguished scientist Sir George Cayley in 1838, The Polytechnic Institution (later the University of Westminster) was created in order to demonstrate new technologies and inventions to the public and played a significant role in the popularisation of science.

In 1912 King George V and Queen Mary paid a private visit to the Regent Street Polytechnic to see the new building at 309 Regent Street. After this visit they were so impressed with what they saw, that they assented to become patrons of the Polytechnic, and the patronage of the monarch has continued since then.