The two joined a cohort of new graduates at the Royal Festival Hall for ceremonies on 10 and 11 July. 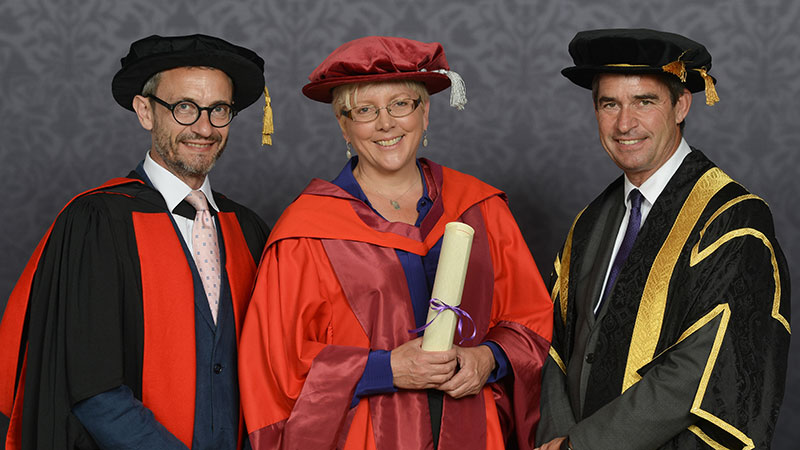 BBC Journalist and Broadcaster Carrie Gracie was named Honorary Doctor of Letters by the Faculty of Social Sciences and Humanities for her longstanding commitment to modern languages and cultures, embodying the values of Westminster.

She is an alumna from the BA Hons Chinese programme. Gracie joined the BBC World Service in 1987 where she has covered African, Chinese and Asia-Pacific regions. Appointed first BBC China editor, she has become a familiar face and cemented herself as a voice for gender equality after resigning from the post over gender pay discrimination earlier in the year. She has since returned to the BBC Newsroom.

The School of Media, Arts and Design named Film and Television Producer Paul Trijbits as Doctor of Arts for his significant contribution to the UK film and television industry and his support to the Westminster community.

He is an alumnus from Westminster’s predecessor institution, the Polytechnic of Central London, where he studied Film and Photographic Arts. He was part of the Advisory Board that supported the Regent Street Cinema’s renovation and relaunch at the University in early 2011. Paul has produced a number of feature films and is Head of the New Cinema Fund, a position he has held since joining the UK Film Council in 2000.

David Batchelor, a retired member of the University of Westminster’s Court of Governors, was also named as Honorary Fellow by Stephen Hart, Chair of the Court, for his contribution as Chair of the Audit Committee and as a student mentor through the University’s mentoring scheme.