Senior Lecturer in Planning and Course Leader of the new Designing Cities: Planning and Architecture BA Honours course Dr Giulio Verdini has been invited to talk at the II Second UNESCO Creative Cities Beijing Summit which took place between 6-8 June. 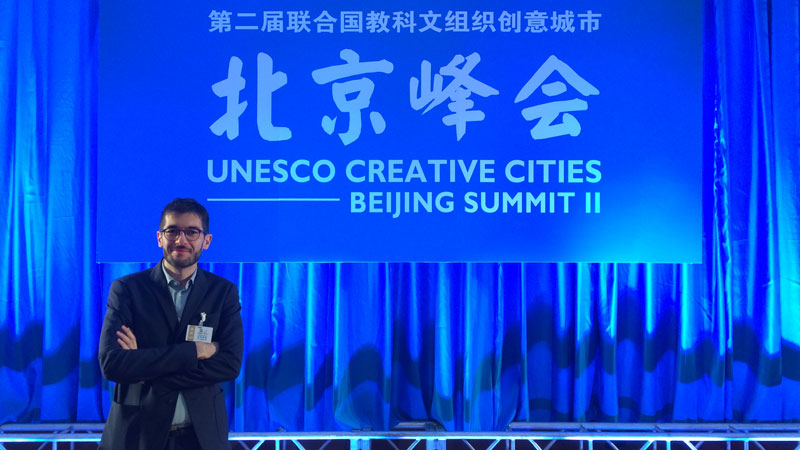 As one of the lead contributors of the forthcoming UNESCO Global Report on ‘Culture for Sustainable Urban Development’ which will be launched at the next UN-HABITAT III Conference held in Quito this October, Dr Verdini presented his research findings on creative cities and regions at a plenary session.

He talked about cases of innovative small towns in Europe and Asia, which have successfully tapped into local resources to fight their condition of marginality and used creativity to reinvent new patterns of sustainable development. For example, insightful case studies included online selling supporting local economy in rural China, and South Italy where informal learning settings have been tried out to make science and technology more popular among young people.

The UNESCO Creative Cities Summit, hosted by the Mayor of Beijing, was opened by the Director-General of UNESCO Irina Bokova, and the Minister of Education of China  Mr Yuan Guiren. They addressed representatives from 60 countries, including mayors, deputy mayors and policy-makers of the UNESCO Creative Cities, academics and experts, from across the world.

On this occasion, the recently created International Center for Creativity and Sustainable Development (ICCSD) under the auspices of UNESCO in Beijing, was officially launched.

The Summit was a fruitful platform to discuss how to set a future research agenda concerning both urban creativity and sustainable development, in line with the 2030 Agenda for Sustainable Development.

Speaking about his invitation to the Summit, Dr Verdini said: “We are facing a great paradigm shift in planning and designing the cities of tomorrow. The advocacy of UNESCO for placing culture at the centre of the international policy agenda on sustainable urban development is something that cannot be underestimated. Our BA programme ‘Designing Cities’, which will be launched in September 2016, will incorporate the key messages of the next 20 years’ urban agenda that will be discussed at the UN-Habitat III Conference in Quito’.