An exhibition which attempts to offer a realistic and humane perspective of the people affected by the refugee crisis was co-organised by alumni Miholyn Soon and Sassan Salamian, both recent graduates from the Film and Television Production BA Honours course (now Film BA Honours), along with a team of other Westminster graduates and students. 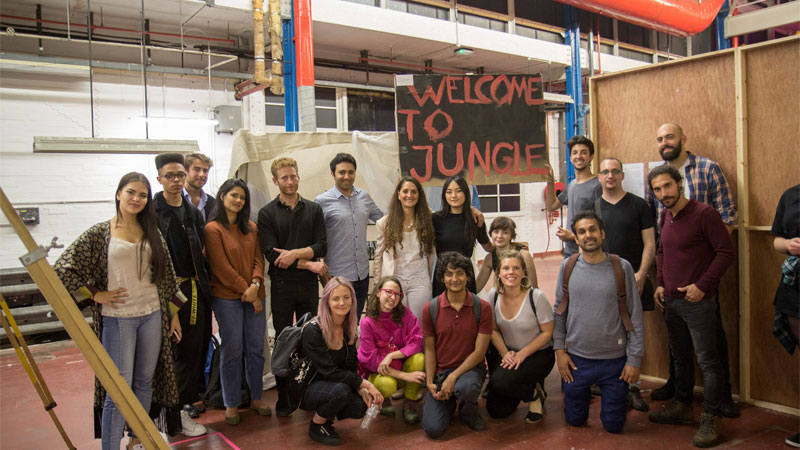 Some of the photographs on display were taken by Sassan Salamian in the Jerash Gaza Camp, where Palestinian refugees live, which he and other Westminster students had visited as part of the AlSadi Changing Lives Programme in Jordan.

Other people involved in the exhibition were Nathalie Sawon from Lebanon, Reem Khabbazy from Syria, who exhibited photographs from her home country and Shona Rawlins, who gave an opening talk on the linguistic approach to the refugee crisis, explaining the definitive differences between a refugee and a migrant.

Speaking about the event Sassan said:  “The idea for this exhibition was first inspired when organiser Miholyn Soon and I were on a trip to Paris in December 2016. Strolling down the Champs Elysee, we saw entire migrant families, sitting in the freezing cold temperatures, begging for money. We saw this just weeks after the infamous Jungle camp had been forcibly shut down by French authorities.

“We found it incredibly saddening to see that many of its inhabitants had those in similar situations had been left out in the cold with no other option available. We knew we needed to speak out about this and create a space in which the public could engage in the issue more and meet refugees in person in order to break down the strongly conditioned stereotypes associated with them.”

The event was a safe space for people to ask questions and discuss the refugee crisis, as it is an important issue that needs to be addressed more often.