University of Westminster’s Impact on the Speaker’s Commission on Digital Democracy’s New Report “Open Up!”

The "Open Up!" report discusses how parliament can become a more open and more public sphere and asks what role Digital Media can play. 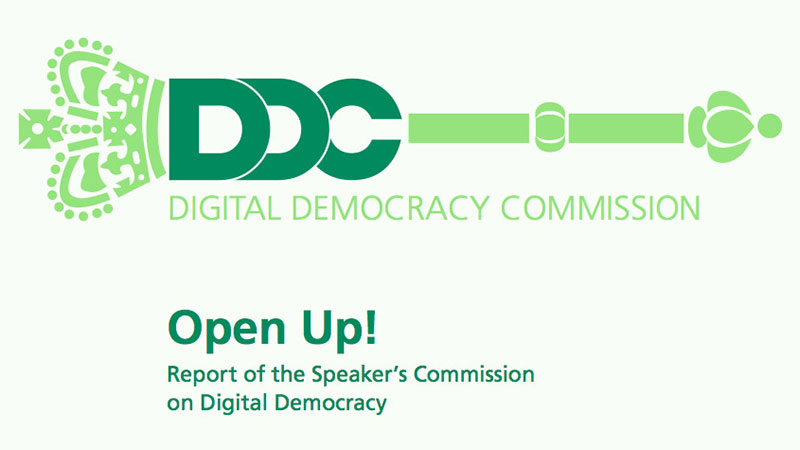 The University of Westminster’s Centre for Social Media Research and the Centre for the Study of Democracy provided input for the Report in the form of a workshop and evidence.

The Report argues that citizens are in general not apolitical, but often feel Parliament is too distant from them, does not represent them well, and that its work is difficult to understand. It formulates five key targets for improving political understanding, interaction, participation, voting, and information provision and formulates 34 recommendations.

They include suggestions such as a political education offensive in schools, simplifying parliamentary language, digital tools for annotating draft legislation and for democratic engagement, making parliamentary content open data, re-useable, better searchable and more visual, to give special attention to politically disengaged groups, and to enable digitally supported citizen contributions to the law-making process.

Christian Fuchs, Professor of Social Media, commented: “The Commission has taken an open approach in bringing about this Report that is well aware that there are no technological fixes to democratic disengagement and the democratic digital divide. It stresses that we need institutional reforms of democracy supported by digital and social media”.

The University of Westminster’s input had explicit impact on the Report’s proposal to use digital media for opening up parliamentary discussions to citizens. The Report suggests experimenting with using online discussion forums, a “Cyber Chamber”, as input for debates in Westminster Hall and employing digital media for “new ways of enabling the public to put forward questions to ministers” (recommendation 19).

Christian Fuchs: “I have suggested that Parliament develops and runs its own kind of YouTube – QTube – that groups of citizens could use for submitting short videos as questions to the Prime Minster, which could make the weekly Prime Minister’s Questions more citizen-focused. The challenge is if and how based on this Report democratic reforms and digital democracy will be further pursued after the general elections. A key question will be if digital democracy will be limited by trying to rely on ready-made commercial technologies and platforms or if Parliament will rather try to develop and run its own genuine public online services for digital democracy”.

Presentation of the Report:
http://www.parliament.uk/business/commons/the-speaker/speakers-commission-on-digital-democracy/ddc-news/report-launch-