On Wednesday 20 March, the University of Westminster’s Green Dot Project were invited to speak at a panel conference held in partnership with GenPol entitled: ‘#MeToo on Campus: Ending Sexual Misconduct in UK Universities’. 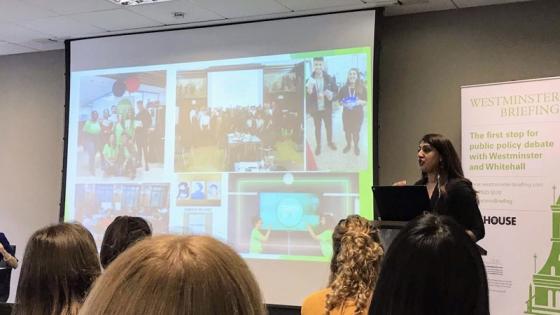 Shaneen Kainth speaking at the conference

Green Dot is an active bystander training programme for staff and students at universities and Higher Education institutions. It equips them with the knowledge, skills and confidence needed to identify, intervene with and report acts of sexual assault. Launched in 2006 by the University of Kentucky, it has reached 575 schools and colleges throughout the United States and trained over 3,500 staff and students so far. The University of Westminster is proud to be the first university in the UK to introduce the Green Dot Initiative, supported by Catalyst (Office for Students) and the Quintin Hogg Trust.

Through the bystander training programme, participants are able to learn the basics of bystander intervention and the principles of being an active witness in situations of power-based violence. Green Dot aims to change the culture of the institutions it works within, providing staff and students with the knowledge and confidence to challenge inappropriate behaviour or any situation where there is a risk of escalation or harm. Training is provided by members of academic and professional staff at Westminster who themselves have been trained and accredited through the programme.

The aim of the #MeToo Campus Conference was to bring together government bodies, regulators, institutions and campaign groups to discuss the progress of the university ‘#MeToo movement’ and the next steps that need to be taken in eliminating misconduct as a whole. The panel was attended by representatives from a number of well-known organisations including the Office for Students, The Consent Collective and the Good Night Out Campaign. On Wednesday 20 March, the University of Westminster’s Green Dot Project were invited to speak at a panel conference held in partnership with GenPol entitled: ‘#MeToo on Campus: Ending Sexual Misconduct in UK Universities’., Westminster’s Green Dot Project Coordinator, participated in the closing panel entitled: Best Practice in Training Staff and Students, detailing Green Dot’s important role in tackling sexual misconduct on campus, which was then followed by a Q&A session.

Following the event, Shaneen Kainth said: “The University of Westminster is such a diverse place that we would do it injustice by not portraying this in our Green Dot scenarios. We cater the scenarios to race, religion, sexuality, disability, ability and more. We challenge our students and staff to think outside the stereotype of male to female violence as everyone can be affected.” Lareb Naseem, President of the Students Union, also represented the University and extended her support towards the conference.

The Green Dot project will also be present at the second #MeToo Campus Conference taking place in Manchester in May.