The Guardian has announced that a University of Westminster undergraduate student has been shortlisted for the 36th annual Guardian Student Media Awards 2014 in the Feature Writer of the Year category. James Tennent, BA Honours Arabic and Linguistics student, is among the five candidates for the prestigious award who will attend the lavish awards ceremony in London on 27 November. 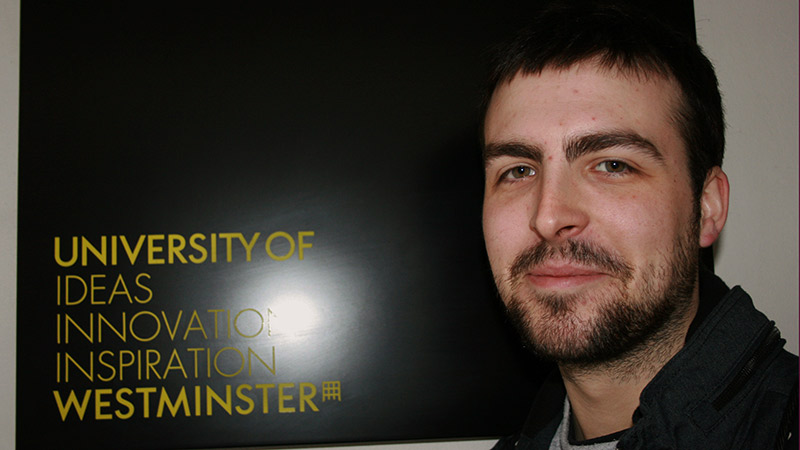 More than 700 entrants in nine categories put themselves forward for this year’s awards that are judged by a high-profile panel of industry practitioners including the Guardian News & Media editor-in-chief Alan Rusbridger, Financial Times deputy editor John Thornhill and Cate Sevilla, managing editor of Buzzfeed UK.

James said, “When I learnt that I got shortlisted for this award, it was very cool and it was really surprising. I had totally forgotten about it [the entry] and I didn’t really expect it, so that was really nice. I’ve been working really hard and being shortlisted for an award like this is validation for what I am doing.”

The fourth year student sees journalism as his student job and regularly writes for The Independent and Vice Magazine amongst others. He explains the BA Honours Arabic and Linguistics programme helps achieve his ultimate goal. “I really want to combine my passion for writing and for the Arabic language and become a foreign correspondent in the Middle East which would be my dream.”

James spent his third year of study in Rabat, Morocco participating in the University of Westminster’s Study Abroad programme that led to the inspiration for one of his feature articles he submitted as an entry for the award. “My year in Morocco was a great educational experience. If you are constantly learning a language in a classroom, you forget that this actually has usage outside. A really important part of learning is talking to people and learning how to talk to people in this language.” Engaging with people during his experience abroad helped James to develop and research his feature article for submission to the award.

The investigative piece explores the hidden hash-making world of Morocco making it a unique article of its kind. His other entries included a feature written in Abu Dhabi, United Arab Emirates on Dubai’s rappers coming from an elite background, yet attempting to produce music in a genre that is traditionally associated with deprived lifestyles, and a piece discussing how ‘free’ smartphone games can lead to costly bills.

James is now looking forward to receiving his invitation to the awards ceremony. “I cannot wait. I don’t really know what to expect though; I guess I’m ready to be surprised”. He adds smiling, "I will just try not to drink too much champagne.”