The winners of the University of Westminster’s International Design Competition, jointly run with the National Association of Students of Architecture (NASA) India and Massive Small have been announced. 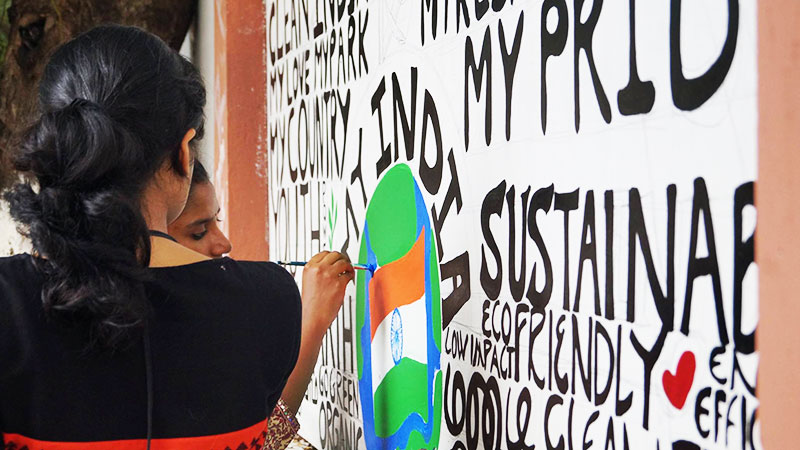 The 2015-16 design competition, which had the brief of ‘Collective challenge to transform 100 public spaces in South Asia’, was launched on 24 June 2015 attracting registration from over 500 undergraduate architecture students from 42 towns and cities in South Asia. The winning team of the design competition, along with the two runners up from universities across South Asia, were awarded at the Annual Convention of the National Association of Students of Architecture in India.

An open online voting process launched on social media in December 2015, with the aim of sharing the inspiring works of creative minds with a larger global audience, gathered over 10,000 votes.

The winning team receiving the Citation Award were students Swetha Saravanan, Dullari Sethupathi and Anisha Rahana from the SRM University’s School of Architecture and Interior Design, for their project entitled Project Revamp.

Project Revamp is a project that has transformed a disused recreational space in a low income housing area in Chennai. The site is now a vibrant usable public space with robust design interventions including a performance stage, a large soft play area for local sports such as Kabaddi, along with safe social areas for women and young children. The project demonstrates great resilience having been severely damaged during the recent floods in Chennai in December 2015, but then rebuilt by the youth within the community. The design team successfully engaged with local stakeholders, authorities and residents to build social capital and bring about physical change through their creativity.

The two Special Mention Awards went to the projects called Arogya Dhama and The Kolam. The Arogya Dhama project was implemented by students from University Visvesvaraya College of Engineering, Bengaluru. The group worked closely with stakeholders and professionals to make their designs a reality, on a site that has been part of the group’s childhood. The built structure is a long spanning bamboo shelter now used as a public gathering space for up to 200 people, and a place to perform yoga on the banks of Sankey Tank in Bangalore.

The Kolam, a project by Anna University’s School of Architecture and Planning, Chennai, consists of the transformation of two local public transport nodes into lively spaces reflecting local cultural elements. The project was inspired by the local traditional art, Kolam. Impromptu contributions from the people of Chennai led the concept of contextual placemaking within these mundane looking Mass Rapid Transit Systems (MRTS) stations in Chennai. A QR code was developed and elements of digital technology were integrated within the public space to guide the commuters.

The shortlisted entries will be published in the second edition of the international publication of the Massive Small Compendium, and its online source book.

The University of Westminster will sponsor a week’s trip to London for the overall winning team as well as hold a summer exhibition showcasing shortlisted and winning designs at the University’s Marylebone Campus, home to the Faculty of Architecture and the Built Environment.

The process of the competition, its community impact and the works of the students have been widely recognised and shared by national and local newspapers in India as well as the BBC Asian Network in the UK.

The University of Westminster is one of the leading centres for the study of Architecture and the Built Environment inspiring more than 2,000 students at its teaching base at Marylebone, in central London.