On Wednesday 25 February, the University of Westminster’s Faculty of Architecture and the Built Environment hosted a RIBA Lecture Series focussing on the theme of ‘Design Through Production’. The event was well attended by both students and industry professionals. 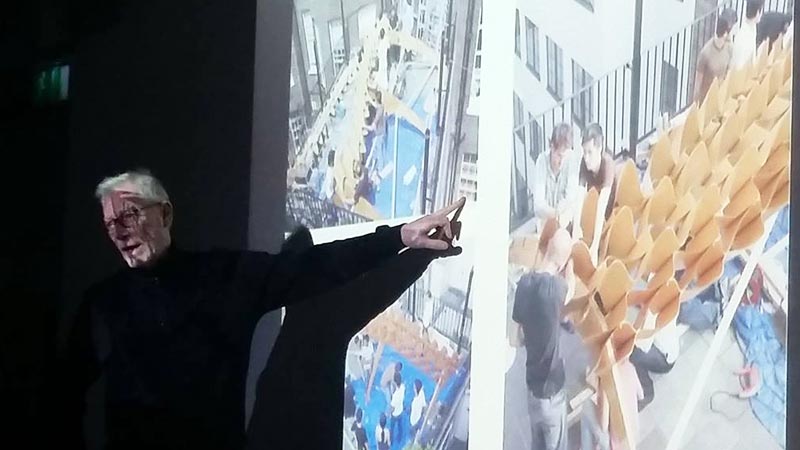 Speakers featured in the lecture included two of the University’s Master of Architecture (MArch) RIBA Part 2 Design Studio DS10 tutors, Toby Burgess and Arthur Mamou-Mani, who presented a talk, entitled ‘The Rise of the Entrepreneur Maker’. The tutors discussed the recent work they have been doing with DS10 students, as well as their wider work in practice and academia.

"Our talk was on the rise of a new type of architecture and architectural practice based on the digital production of pop-up projects done in FabLabs and MakerSpaces; we call them the Maker-Entrepreneurs.

"This self-driven and post-crisis generation funds projects on crowd-funding platforms and materialises them though creative and open-source loops between their digital and physical models. They do not send their plans and sections away to contractors but assemble their projects like giant 'Ikea kits' on site from their parametric models and with the help of fabrication tools such as CNC routers, laser cutters and 3D printers” said tutor Arthur Mamou-Mani.

The event also featured a presentation by David Scott, Senior Lecturer in Architecture and academic leader for the Fabrication Laboratory.

“The Fabrication Laboratory is a new facility for the Faculty comprising a wide range of new 3D printers, laser cutters, CNC routers and robot arms, installed in two new purpose-built spaces. It operates in conjunction with the extensive traditional workshops we already have to offer fantastic new opportunities for making and design through production. The ethos of the Lab is to integrate elements of digital fabrication across our degrees and design studios, as well as opening up the facilities to research and enterprise opportunities for staff and in productive collaborations with practice. The Fab Lab will launch on 28 April and will be fully operational by the start of the next academic year” said David.

An exhibition of DS10 student work was featured at the event, showcasing this year’s proposals for the Burning Man Arts Grant and the four installations that the students are currently installing in Buro Happold’s London headquarters.

The RIBA Lecture Series is supported by the Royal Institute of British Architects (RIBA), and The Institute of Materials, Minerals and Mining (IOM3).

You can follow the progress and news concerning the Westminster DS10 studio on the WeWantToLearn.net blog page.