The University of Westminster was proud to host the Go4SET Celebration and Assessment Day at its Marylebone Campus on 18 April in a bid to inspire young people to pursue careers in STEM subjects (Science, Technology, Engineering and Mathematics). 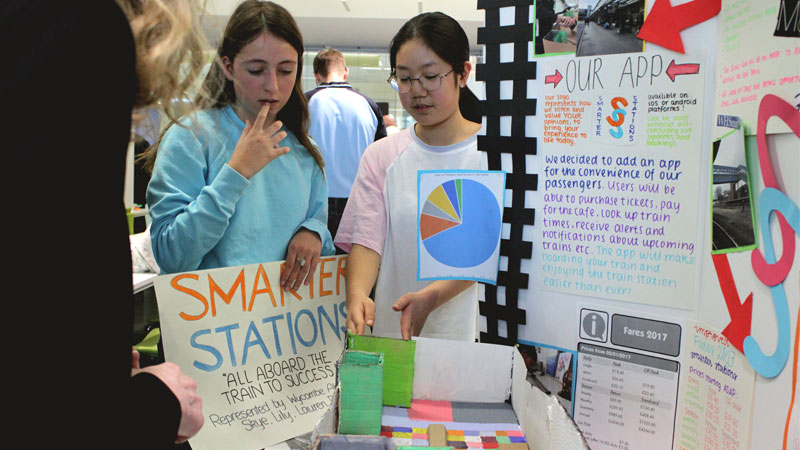 70 pupils from a large number UK secondary schools took part in the ten-week Go4SET 2017 project. The challenge, run by the Engineering Development Trust (EDT), not only promoted STEM subjects but it also presented pupils with an opportunity to be mentored by industry professionals and to showcase their projects to an Assessment Panel consisting of representatives from TFL, Network Rail, and TCS.

The Celebration and Assessment Day was attended by pupils from secondary schools such as North London Grammar School, St Mary’s & St John’s, Central Foundation, Wycombe Abbey, Lady Margaret School, Queen Elizabeth’s Girls, Chobham Academy, and King Solomon Academy.
Pupils’ projects were focusing on different themes such as ‘Stations for the Future’, ‘Create Sport’ or ‘My School is an Island’.

Georgia Sneddon, EDT Go4SET Coordinator, said about the event: “Go4SET is a scheme we are really proud to represent. As year upon year the quality of work these 12-14 year olds produce reaches higher and higher standards, it becomes so hard for our assessors to choose a winner. Our partnership with Network Rail and the University of Westminster has run for many years but this year for us was the biggest success. We hope to continue our work together in promoting STEM within schools for year to come.”

In recognition of the importance of promoting STEM subjects, the University of Westminster is sponsoring a new University Technical College (UTC), named Sir Simon Milton Westminster UTC, in the heart of London’s West End, which opened its doors for 14–18 year olds in 2017. An unrivalled Employer Alliance, consisting of Network Rail (lead employer partner), Transport for London, BT Fleet, Land Securities, Crossrail, Alstom and Sir Robert McAlpine, supports this development through contributions to curriculum design in transport engineering and construction engineering and management.

The EDT Go4SET project is supported by a number of companies including BP and Network Rail. By providing a real life STEM based project, Go4SET aims to raise pupils’ awareness through work related learning within an industrial context, and empower young people to make informed decisions about their future decisions.