Renowned international filmmakers and academics Jean-Pierre Bekolo and Imruh Bakari will be keynote speakers at the ‘African Film and Politics Conference’ organised by the University of Westminster.

Hosted by the University’s Africa Media Centre in association with the Royal African Society’s FILM AFRICA, the conference will take place on Saturday, 9 November and Sunday, 10 November 2013 at the University of Westminster, 309 Regent Street, London.

The two-day conference will be focused on debating the evolving issues of politics, ideology, power and diversity in the dynamic African film industry. Participants will examine how politics relates to generational, gender, ethnic, racial and language issues in African films though a series of presentations and film screenings.

Jane Thorburn, African Film specialist and Principal Lecturer and Course Leader for BA Television Production at the University of Westminster, says: “The Annual African Film Conference at the University of Westminster provides a great opportunity for hearing about the latest in production from all over Africa and for networking with people from other countries who share an interest in African Media and the debates that surround it. ”

Other topics to be covered will also include:

The University of Westminster’s Africa Media Centre was established in January 2009 to promote and disseminate research on communication, film, television, radio, internet, journalism, and social change in Africa.

For further information and schedule of the conference, please visit the website: /research/a-z/camri/events/camri-events-calendar/2013/african-film-and-politics-conference 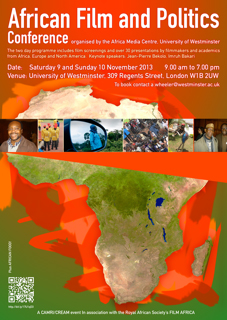 For media passes and further information on the conference, please contact: